Is the IMF turning bearish on Spain?

It’s been a busy week for the IMF, releasing their latest iterations of the World Economic Outlook, Global Financial Stability Report and the Fiscal Monitor. We’ve been poring over the reports and will continue to do so (see here for some initial thoughts on the WEO). One forecast in particular caught our eye – Spain’s.

The IMF seems to have turned significantly more pessimistic on the prospect of a Spanish recovery. The charts below provide a comparison with the previous WEO forecasts (highlighting how these forecasts tend to be overly optimistic) – which very much confirms what we have noted before about the real risks in Spain. 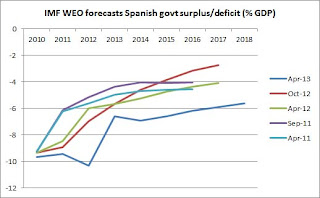 The latest projections for the Spanish deficit (the dark blue line in the above chart) definitely represent a break from previous forecasts. In particular, the forecast for 2014 is 2.3% of GDP higher than in October. The IMF says this is:

“Reflecting the worse unemployment outlook and the lack of specified medium-term measures.”

Translation: the government does not have the necessary budget cuts and reforms in place to meet its desired deficit path – step it up Rajoy.

Such an increase manifests itself in the debt level projections as well. Worryingly, these no longer peak in 2015/16 and level off thereafter. Instead, Spanish debt to GDP is forecast to reach 111% in 2018 and looks set to keep growing rather than peaking and levelling off. 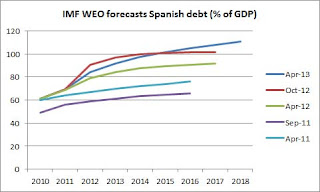 Effectively, this graph also highlights how the forecasts have progressed as the crisis in Spain has evolved from from financial, to a sovereign liquidity crisis and now into a sovereign solvency one. As the IMF notes, sustaining this will be tough:

“[Countries such as Spain] would need to maintain large primary surpluses over the medium term. In the absence of entitlement reforms, projected increases in age-related spending mean that additional measures will still be needed over time, however, to keep the primary surplus constant.”

Translation: Spain needs to run large primary surpluses for a long time, but in the face of increasing welfare and pension spending, this will need to come from a series of additional and painful cuts.

So the IMF does not paint a pretty picture for Spain. Longer and deeper recession, larger deficits at a time when it needs to be moving to surplus and increasing debt, in turn raising questions about the country’s solvency. Let’s not forget, that’s before bringing the bust banking sector into the discussion. Plenty for Rajoy to get on with then…

Update 16:20 18/04/13:
Christine Lagarde has reportedly suggested that Spain should be allowed to ease its austerity programme. Lagarde argues that, although Spain needs fiscal consolidation, it does not need to be front loaded. Such an argument is not going to sit well with the eurozone and will increase the tensions within the Troika (some of which were outlined in this FT article earlier today). As the graph below shows such an approach may not fit well with the IMF own growth forecasts. Even with a 7% deficit, growth next year in Spain will be 0.7% according to the IMF. How much more would need to be spent to get to a respectable 1.5% GDP growth? Double the deficit? 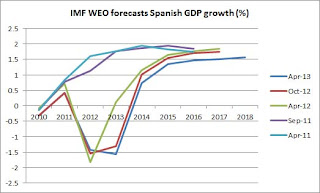 Maybe not something this extreme but with debt already heading towards an unsustainble path it’s not clear that there is much scope for further spending, while markets may put pressure back onto Spain once again. This raises the prospect of a further bailout or transfers from other eurozone states, but as we pointed out at length yesterday, Lagarde is talking about something very different than removing austerity in that case.