Is the academic premise for austerity in the eurozone crumbling? Not quite… 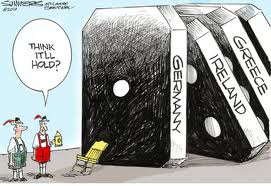 A mini-storm has been whipped up in the economic community overnight after a paper was published highlighting some flaws in the widely cited Reinhart & Rogoff paper ‘Growth in a time of debt’.

A quick recap for those of you not familiar with the paper. It essentially argues that high debt levels are associated with low economic growth. It bases its analysis on data from 44 countries over the past 200 years. It also notes that this relationship gets stronger once debt exceeds 90% of GDP. The paper has been widely cited in defence of and in support for ‘austerity’ – by politicians in both the US and Europe (notably Olli Rehn in respect to the eurozone crisis).

The new research released challenged Reinhart & Rogoff’s (R&R) findings, on the basis of an excel error (oops), data omissions and incorrectly weighting of data. There has been plenty written about which side is correct – you can see a summary of criticisms here and R&R’s responses here and here.

The question that interests us is not necessarily the intricacies of this academic back and forth. To be honest, it is obvious that there is no clear single threshold above which debt begins to impact growth in all countries and that often specific historical experiences in certain countries may not mean much for policies in different times and places (see this Ed Hugh post for a good summary). This is particularly true given some of the unique constraints of the eurozone crisis.

But given that some people are seeing this as a damning indictment of the backing for ‘austerity’, will this have any impact on the approach to the eurozone crisis?

In a word, no. Here are a few reasons why:

So what academics (and policymakers) really should debate is whether fiscal transfers are possible and/or desirable.  Proving or disproving R&R is neither here nor there when it comes to dealing with the eurozone crisis.