Aufstand im Bundestag: Who are Germany’s most rebellious MPs?

On Thursday, the German Bundestag is expected to vote on the Cypriot bailout. The package is likely to be approved with a clear majority – the opposition SPD and Greens will mostly back it. In addition, the symbolically hugely important “chancellor’s majority” – the threshold for the government to get an absolute majority with only the votes of its own MPs – is likely to be reached as well. Only around 12 MPs from the coalition parties (CDU, CSU, FDP) are likely to vote against. This is not particularly surprising. Remember, the bill for this rescue package was largely passed on to Cypriot depositors, and therefore enjoys much greater support in Germany.

Still, with the eurozone bailouts remaining ever-so contentious – and with a new anti-euro party on the German political scene – we thought we’d see how many coalition (CDU, CSU and FDP) MPs have so far rebelled on the various eurozone bailout votes.

As the table below shows (click to enlarge), according to our calculations, at least 36 MPs have rebelled against Merkel on at least one occasion. Four MPs – Klaus-Pieter Willsch & Manfred Kolbe (CDU), Peter Gauweiler (CSU) and Frank Schäffler (FDP) – have a 100% record in rebelling on eurozone votes – for the rest, there’s a surprising spread. 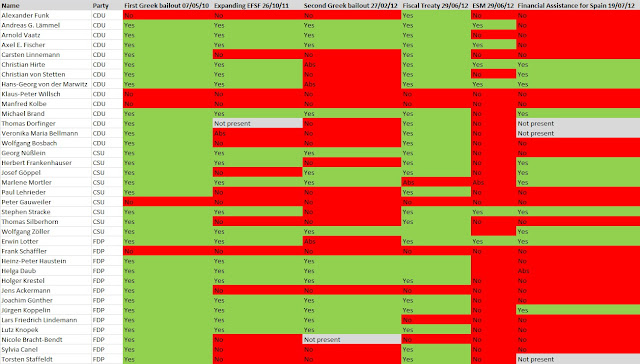