Ten areas where the UK and Germany could agree on Europe 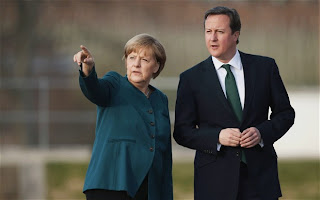 About now David Cameron will sit down with his German counterpart Angela Merkel, with the discussion likely to be dominated by Europe. The issues are complex, but come down to a simple trade-off: Cameron wants Merkel’s support on his vision for a reformed and flexible Europe. Merkel – fearing being left alone in a Mediterranean-dominated EU – wants to find ways to keep Britain on board. So is a new Anglo-German bargain at some point down the line possible? There are those in both the status quo and better off out camps who would answer categorically: “no way – It’s all or nothing for Britain”.

I strongly disagree. As Michael Meister, Deputy Parliamentary Chairman of Merkel’s CDU party, told the BBC Today Programme this morning, “I think we are open to arguments…to move something back [to member states].” For example:

Strengthening national parliaments: Multi-billion euro bailouts have been seen the Bundestag getting more involved in EU affairs, as recently demonstrated by the Cypriot bailout. At the same time, Germany’s traditional support for the European Parliament – seen as pushing an unrepresentative agenda (including Eurobonds) – is starting to wane. Many Germans – including the country’s constitutional court – would fully echo David Cameron’s assertion that national parliaments “are, and will remain, the true source of real democratic legitimacy and accountability in the EU”.

Cutting the cost of EU bureaucracy: Germans are just as critical of excessive EU bureaucracy as the British. Following a story in Die Welt am Sonntag that 4,365 EU officials earned more than Angela Merkel, even Germany’s Europhile Foreign Minister Guido Westerwelle said that “The salary structure in Brussels is worth taking a critical look at”. Berlin has already backed Cameron’s demand for a pay cut for EU officials.

Ending recycling of EU regeneration cash: Westerwelle – alongside a host of German politicians and commentators – has strongly criticised the EU’s so-called “structural funds” for leading to “aberrations such as EU money going to day spas and romantic hotels.” Cutting down on these funds, for example by limiting them to only the genuinely poor regions in Europe, would save both the UK and Germany billions. (The German federal government would have to find a way of buying off the Easter Länder, but that’s fully possible).

Phasing out farm subsidies: As in the UK, there’s strong appetite for ending the EU’s totally irrational direct farm subsidies – the German Social Democrats recently came out in favour of spending more of this cash on research and development.

Cutting the EU budget: Merkel already backed Cameron over a historic cut to the EU’s long-term budget – despite many at the time saying this was “impossible”.

Less intrusive EU environmental law: Given its industrial base, Germany could find its economy even more hamstrung by burdensome EU green laws than the UK’s, especially as the country has given up completely on nuclear power. While the country broadly backs switching to renewable energy, it most definitely wants to maintain as much control as possible over its energy mix (overall targets rather than micromanaging EU green laws could be one compromise).

Devolving powers over fisheries: The UK and Germany have both been the driving forces behind current efforts to devolve powers over the EU’s fisheries policy to member states, having groups of countries deciding quotas rather that this being micromanaged in Brussels. These are very important and long overdue reforms.

Migrants’ access to benefits: Whilst both countries, rightly, remain supportive of EU free movement of workers, they also recognise the need for safeguards to make sure people come to work rather than claim benefits. As Germany’s Interior Minister Hans-Pieter Friedrich put it, “If people in Germany feel that their solidarity and openness is being abused and our welfare system is looted then there will be legitimate anger. The message for the EU Commission is clear: Brussels has to take stronger account of situation of the local population in its decision making process.”

Free trade: At times, Germany can slip into a protectionist mood, but generally, it’s very keen that the EU upholds a rule-based order that allows for free trade. The UK and Germany are currently blocking proposals for “reciprocity” to be included as a tenet of EU trade policy – which could seriously hurt both UK and German exports.

Single market safeguards: The UK and Germany have already agreed a “double majority” principle to apply to some banking rules, to make sure that the Eurozone doesn’t write the rules for the UK and other “outs”. Again, this was seen by some as “impossible” as it would give the UK “too much power” (but was agreed last December). Here, Berlin acknowledges that the UK is within its rights to ask for safeguards, given that it’s the Eurozone – and not the UK – that is changing the rules of the game.

There are other areas as well, for example the German constitutional court has ruled that social policy is an area of particular importance for a country “to democratically shape itself”, while former Bavarian President Edmund Stoiber has been specifically tasked with cutting EU red tape.

The UK government needs to invest a lot of political capital and be far more clever that it has been up until now. But don’t believe the pessimists; although it will be tough, a new Anglo-German bargain for a thoroughly reformed Europe is fully possible.