Has Germany really gone off the idea of EU treaty change? (Part II)

Some EU pundits have spent the last several months arguing that a change to the EU treaties is a non-starter. “Don’t you know”, they say with a high degree of confidence “the Germans have gone off it.” And in any case, no one else wants it any way for fear of ratification problems, not least in France.

Charles Grant from the Centre for European Reform said last week that “the Germans have cooled on the idea of rewriting the treaties.” Another observer on BBC Newsnight (not our guy of course) said as late as last Friday that “the German government isn’t at all keen on EU treaty change in the short-term”, which the studio discussion then picked up on.

It’s is definitely the case that the appetite for EU treaty change across Europe is limited, and for that reason it’ll be a challenge to achieve it. But as we’ve said repeatedly, it’s absolutely 100% wrong to say that the Germans have gone off the idea of EU treaty change. As we stated in our briefing ahead of Cameron’s Europe speech in January:

“There are currently seven broad proposals floating around for more Eurozone integration – most of which need EU treaty changes to be fully completed…Germany, in particular, is nervous about ad hoc-arrangements lacking firm constitutional grounding.” 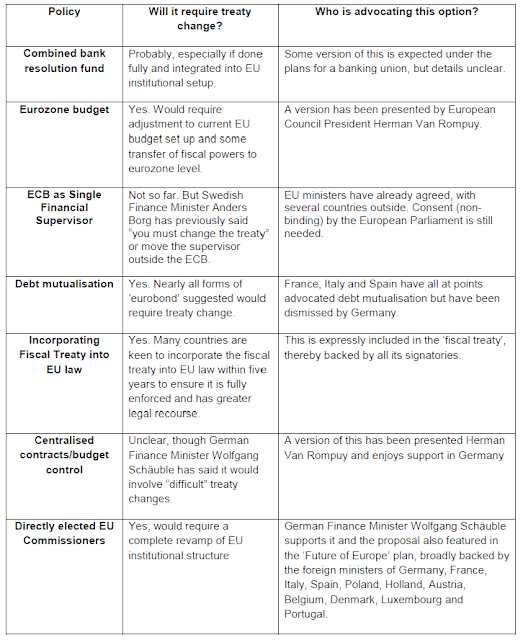 Crucially, this also includes current proposal for a banking union, which from a German point, sit uncomfortably with the EU treaties. A few weeks ago we noted,

“Those who say that Germany has ‘gone off the idea’ of Treaty change – in light of David Cameron’s speech where he mentioned EU treaty change as an avenue for reform – clearly haven’t quite appreciated the nature of the proposals floating around.”

Well what do you know, as we reported in today’s press summary, at last week’s crucial meeting of EU finance ministers, German Finance Minister Wolfgang Schäuble insisted that an EU Treaty revision is necessary to achieve a banking union, claiming that:

“We’ll only do this on a clear legal basis, because I don’t want risks in Karlsruhe.”

Somehow this announcement still managed to surprise people. But wasn’t it always obvious? Anyone who is at all familiar with German history will understand why they’re so keen to separate monetary policy from bank supervision. If keeping the two tasks with the ECB, such separation can only take place  if there’s a rewriting of the EU treaties (so that the final say no longer rests with the ECB Governing Council). This also matters for non-eurozone countries as that guarantees them an equal say in the ECB supervision structure, and therefore makes them more likely to join (particularly Sweden and Denmark, which the Germans are keen on). Indeed, the Swedes – in a very brave moment – tried to push for just such a treaty change but dropped the idea. Further steps, such as a joint resolution fund, will also require treaty changes.

There are plenty of hurdles to fresh EU Treaty negotiations – some countries will want to avoid them like the plague – and even if the Germans can get them off the ground, the timing and scope (limited or full?), remains unclear. It is also still not fully clear whether the eurozone could circumvent the UK via an inter-governmental arrangement if the latter kicks up too much fuss.

But what’s clear is that, in the land of ordnungspolitk, the idea of an EU treaty change is alive and well. So hör auf mit dem Blödsinn as the Germans would say.