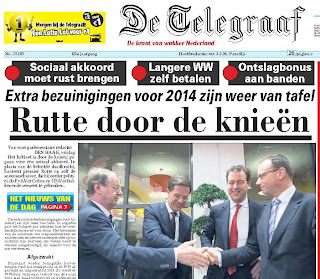 The Netherlands, considered one of the eurozone’s fiscal hawks, has become the latest country to test the EU’s new instruments for imposing budget discipline (now composed of the Fiscal Compact, Six-pack, Two-pack and European Semester).

The Dutch government yesterday agreed to postpone €4.3 billion in budget cuts for 2014 in a deal with social partners (trade unions, employers groups etc.), counting on economic growth to keep the budget deficit below the EU-mandated ceiling next year. In the autumn, it will reconsider whether to implement the cuts.

The measures for 2014, now postponed, had been promised to EU Economic and Monetary Affairs Commissioner Olli Rehn only last month in return for leniency regarding the Dutch government’s 3.3% budget deficit in 2013, which is in breach of EU targets. The country has been in the EU’s “excessive deficit procedure” since 2009, and in 2012 the government collapsed over the failure to stick within EU budget limits.

Predictions for the 2014 budget deficit range from 3.4% (The Dutch Bureau for Economic Policy Analysis CPB) to 3.6% (Commission). If the economic growth the Dutch government is hoping for doesn’t materialise, the 2014 deficit threatens to be even bigger. The European Commission will reportedly only respond when it gets to see the full package of measures.

Earlier this week, Finance Minister Jeroen Dijsselbloem vowed to respect the EU’s 3% budget deficit rule in 2014, so this is being billed by some in the Dutch press as a U-turn by Prime Minister Mark Rutte. Today’s headline of the largest Dutch daily, De Telegraaf, reads: “Rutte backs down” (picture) while the newspaper also complains that “important labour market reforms have been watered down and postponed to 2016.”

The Dutch economy is currently going through a large-scale correction after a housing boom went bust, partly as a result of the Dutch government’s reduction of generous fiscal incentives to buy a house. Last year, Moody’s expressed doubts about whether the Netherlands could keep its triple-A rating.

And, in the background, is Geert Wilders’ anti-EU PVV party, which is again polling as the country’s most popular political party.