Ten things that David Cameron should NOT say to Angela Merkel 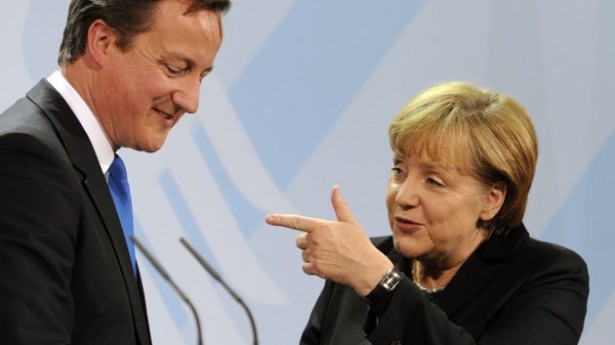 UK PM David Cameron is today meeting German Chancellor Angela Merkel, as part of British efforts to explain to EU partners the thinking behind Cameron’s recent EU speech. As we’ve argued repeatedly, this is the UK’s most important bilateral relationship in Europe. So what could Cameron tell Merkel to convince her that his vision of Europe is worth investing in? Well, see here and here for some suggestions.

But knowing British diplomacy, equally important is what Cameron SHOULDN’T say. So after consulting our esteemed colleagues at Open Europe Berlin, we give you ten quips that most certainly wouldn’t go down well with the Iron Chancellor – and that Cameron best stay well clear of. Here goes:
1. “How’s that new exciting anti-euro party coming along?”

3. “We have formed this new ECR group in European Parliament – thought you might want to get involved?”

4. “I always thought the ECB should become more activist.”

5. “We’ve got some very clever people in the City who could design those Eurobonds for you. It’s the ‘inexorable logic’ of a monetary union don’t you know?”

6. “We’ve got a new central bank governor, he’s foreign, and he has stressed the need for ‘flexible inflation targeting’, why are you guys so uptight about Mario?”

7. “Can you point me to that no-bailout clause in the EU treaties again?”

8. “Have you been following Berlusconi’s political comeback? Very interesting…”

9. “Those tweets of yours are hilarious – who says Germans don’t have a sense of humour?”

One of those is an actual Cameron quote – a free copy of an Open Europe report of choice for those who can figure out which….