Beyond the simplifications, what is Margaret Thatcher’s European legacy?

Margaret Thatcher is often labelled a ‘eurosceptic’ – a modern day British Boadicea ready to do battle against all things European. But she was also today described as a “a committed European” by none less than the arch-europhile President of the European Parliament, Martin Schultz. Another EU President (Jose Manuel Barroso) added with some circumspect that she was an “engaged player in the European Union”, “remembered for both her contributions to and her reserves about our common project.” Confused? Here she is in her own words:

On a European superstate:

“What is the point of trying to get elected to Parliament only to hand over sterling and the powers of this House to Europe?”

On the EU budget:

On the Treaty of Maastricht:

“It is nonsense to describe Maastricht as if it were a technical adjustment to the Treaty of Rome. It expands from 11 to 20 the number of policy areas in which the unelected Commission in Brussels can have the sole right of initiative.”

On the single currency:

“I do not blame the Germans. They have managed the new currency in exactly the way we should have managed ours. They put their country first and in doing so showed up the impossibility of a single currency for a group of such divergent economies as those of Europe.”

On EU bureaucracy and CAP protectionism:

“…we were not prepared to reach agreement unless we had stabilisers that mainly involved price cuts…We were amazed when the French refused to confirm them and said… they must go to a meeting of Foreign Ministers. Now I did point out that we had all Foreign Ministers here…so that they could have agreed then. This obvious factor did not escape them; they merely refused to have it…Only a Frenchman could have done that. It is absolutely unbelievable.” 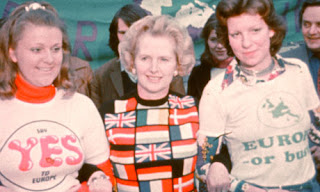 But, clearly, she was not hostile to European cooperation – and most certainly not against “more Europe” in the areas that really do count, such as boosting economic growth. She campaigned to keep the UK in the E.E.C in 1975, was in favour of and and a driver behind the Single European Act, which saw a quantum leap for the Single Market, and championed EU enlargement to take in former communist states in central and eastern Europe. She saw the economic benefits of the EU if separated from what she saw as the political costs of centralisation.

To this end in her famous Bruges Speech she set out a pragmatic vision – which, if you read the actual speech, can, at least in part, be seen as ‘pro-European’:

“Europe is not the creation of the Treaty of Rome. Nor is the European idea the property of any group or institution. We British are as much heirs to the legacy of European culture as any other nation. Our links to the rest of Europe, the continent of Europe, have been the dominant factor in our history…”

“Let Europe be a family of nations, understanding each other better, appreciating each other more, doing more together but relishing our national identity no less than our common European endeavour. Let us have a Europe which plays its full part in the wider world, which looks outward not inward, and which preserves that Atlantic community—that Europe on both sides of the Atlantic—which is our noblest inheritance and our greatest strength.”

So, as PM, Margaret Thatcher was neither “pro” nor “anti” EU. She set out more clearly than any other recent Prime Minister her own vision for the EU. A vision as legitimate and authentic as that which ultimately prevailed for the eurozone. She was quite prepared to argue for EU integration when there was a real economic benefit to be had. She was however a “sceptic”, in the true sense of the word, in that she was suspicious of the prospect of political and ideological ambition alone stamping out economic and democratic reality. In that sense, given recent developments in the eurozone she was perhaps ahead of her time.