Where will Cypriot growth come from?

This is now emerging as the key question for Cyprus following the severe mishandling of its bailout. The financial services sector, along with real estate and related businesses, which accounted for around 30% of Gross Value Added in the economy is now essentially gone as a source of growth.

Cyprus’ main trading partners, Greece in particular, remain mired in recession. Its two largest banks – key employers – will be restructured and unemployment will undoubtedly rise. Meanwhile, the government will be cutting spending and raising taxes, laying off public sector workers and embarking on some strict labour and product market reforms – as part of the standard Troika bailout package. Many of these reforms are needed but as we have seen across Europe, when combined with other impacts mentioned above, a downward spiral can be created.
The key hope for growth remains tourism. However, with the euro remaining strong and the prospect for political and social unrest in Cyprus still high, it is difficult to see a huge boost in this area. It will continue to truck along but is unlikely to fill the gap left by other areas of the economy shrinking. As we have discussed before, the prospect of growth from large gas revenues remains a pipe dream for now.
With all of this in mind we have put together a comparison of some of the previous growth estimates, along with the implicit ones included in the latest troika report and some of OE’s initial (optimistic) projections (click to enlarge). 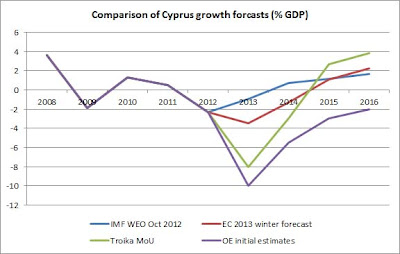 All of this remains uncertain, depending on when capital controls are removed and how investors respond but it does not make pretty reading. All previous hopes for the economy are off the table and expectations need to be severely adjusted. The Troika’s estimates are very optimistic, particularly in terms of returning to rapid growth in 2015 and 2016. Furthermore, if the growth estimates included in the bailout prove to be overly optimistic it means Cyprus will, just as Greece did, require further financial assistance.