How many wise men does it take to fix Italian politics? 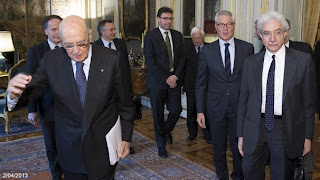 Markets remain deceptively calm as uncertainty rumbles on in Italy. Italian President Giorgio Napolitano has created two commissions, now known as the ‘wise-men’, which will seek to find some common ground between the various political parties in Italy and therefore, potentially, provide a basis for a coalition government. Although, they only have 8 to 10 days to do so.
The first committee with look at economic, social and European affairs, while the second will focus on institutional (in particular electoral) reform. Napolitano has been at pains to stress that the committees will not determine an agenda for a new government or set any policies; they will simply look to facilitate fresh dialogue and find areas which the parties can work together on.
So where does each party stand now? What are the prospects of finding some ground to build a coalition upon?
Pier Luigi Bersani and his centre-left group:
Silvio Berlusconi and his centre-right group:
Beppe Grillo and his Five Star Movement:
So, the groups remain split along some fairly fundamental lines. Some elements of consensus may be found but it remains unlikely that these will be enough to form a workable long term coalition. A more likely outcome remains a grand coalition being put in place to push through some electoral reform ahead of new elections. A similar scenario with another technocratic government is also possible.
At the same time the new Presidential elections loom large. Voting begins on the 18 April with Napolitano’s term officially expiring on 15 May. This is likely to lead to further delays in forming a government. Napolitano looks set to pass the problem onto his successor, with many criticising the formation of the working groups as a way to eat up time. He can also not call new elections, meaning that the new President would be responsible for doing so – realistically then they cannot take place until June.
Another month or two of uncertainty seems likely in Italy, and any certainty may only come with new elections being announced (itself a source of further uncertainty). Markets have been calm so far, but with the acute problems in Cyprus dying down the spotlight could once again turn on Italy.
Author : Open Europe blog team
Print