The package is coming together. The IMF has officially announced that it will take part in the Cypriot bailout, providing €1bn of the total €10bn in loans – that gives a UK share of around €50m (see our thoughts here on UK IMF shares). That leaves €9bn to be provided by the eurozone, likely through the ESM. Below we breakdown the country shares (click to enlarge): 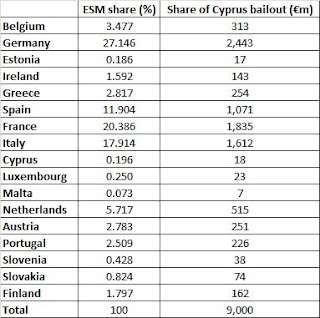 Other details of the Memorandum of Understanding (MoU) filtering through include:
A few hurdles left to jump then in terms of approval from national parliaments – which is no mean feat given that the figures underpinning the bailout are likely to come under some well-deserved scrutiny.