The Great European Bank Run that never was? 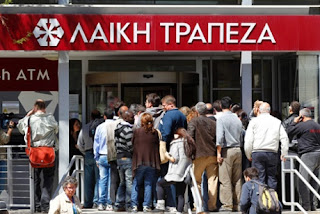 Journalists were descending on banks across Cyprus this morning to monitor whether Cypriot depositors would rush to withdraw their cash as the country’s banks opened after being closed for 10 days. So far, however, there have been virtually no dramatic scenes of desperate people flocking to ATM machines and banks. There’s a feeling of calm. Those who expected Northern Rock style scenes have been left disappointed. However,  a couple of points:

In the meantime the latest data on deposits in Cyprus in February was released this morning. Total deposits fell from €68.4bn to €67.5bn – a 1.3% fall, but not exactly as disastrous as some may have expected.
At the same time, as we predicted, depositors elsewhere in Europe – in particular Spain and Italy – have so far shown zero inclination to see themselves as next in line. There has been, however, a drop in banks shares in the wake of comments by Eurogroup Chief Jeroen Dijsselbloem.
So not the big collapse of everything that some expected, but, the capital controls are likely to play a role in mitigating this. As we have pointed out, the real challenge comes when the Cypriot government looks to remove capital controls and once the data on electronic transactions out of Cyprus becomes clearer.
Author : Open Europe blog team
Print