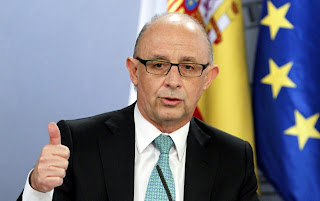 Two weeks ago, we noted on our blog that the Spanish Tax Agency had delayed around €5bn of tax refunds (due in December 2012) deferring payments to January 2013 instead. This contributed to Spain missing its EU-mandated 2012 deficit target (6.74% of GDP, instead of 6.3% of GDP).

We wondered whether the sudden increase in tax refunds (up by 82.8% in January 2013 compared to previous year) would not lead the European Commission to start asking some question. Sure enough.

The EU’s statistics office Eurostat has asked Spain to raise its 2012 deficit to 6.98% arguing that Spain was not correctly accounting for tax refunds. Basically, Eurostat rules say tax refunds have to be counted towards the deficit when they are claimed by taxpayers. Spain only includes them when they are paid out.

This means Spain will have to retroactively revise its deficit figures, going all the way back all to 1995. The difference for 2012 in itself is not huge. And Spain remains unlikely to face sanctions, as the European Commission has now shifted its focus to ‘structural’ deficit, but not inspiring confidence.

In an official note published yesterday, the Spanish Budget Ministry tried to blame Eurostat for the revision of the deficit figure, saying it was due to a methodological change “demanded by Eurostat over the past few days”.

But according to a spokeswoman for EU Tax Commissioner Algirdas Semeta quoted by Expansión,

“Eurostat hasn’t changed its methodology or its rules. It has simply found out that the methodology used by Spain was incorrect.”

Eurostat has realised this only now because,

Eurostat will publish its final deficit figures on 22 April. Spanish Budget Minister Cristóbal Montoro said this month that, if anything, the 2012 deficit figure of 6.74% of GDP would have been revised downwards. He’s been proved wrong once. He can only hope it doesn’t happen again.