Has Germany really gone off the idea of an EU treaty change? 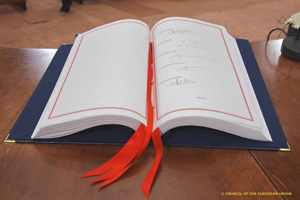 Usually technical meetings behind closed doors in Brussels are pretty dull. However, judging by some of the reports floating around, yesterday’s meeting of the EU Committee of Permanent Representatives (COREPER) may have bucked the trend somewhat. This is the negotiation forum for member states’ EU ambassadors – the key guys involved in talks over EU policy. This is where a lot of decisions, de facto, are being made.

As we noted in today’s press summary the UK was outright outvoted on the plans for capital requirements for banks (CRD IV), which entail the controversial caps on bankers’ bonuses.

However, though it was already clear that the UK had lost that particular battle, it was the talks over the EU’s proposed, and in part agreed, banking union which caught our eye. EU ambassadors failed to reach agreement amid continued North-South divisions, but the reason why is interesting.

Most media failed to pick up on this, but the WSJ Real Time Brussels blog rightly notes that Germany was strongly pushing for a clearer separation between the ECB’s monetary duties and supervisory responsibilities, to avoid a running conflict of interest (see here). The only way this can really happen is to give the supervisory board the final say over supervisory decisions (as opposed to now when it rests with the ECB’s Governing Council). This, in turn, requires EU treaty change. The Germans wanted a clear commitment from other member states that this would happen.

According to the WSJ, Berlin also insisted on giving national parliaments (not just the European Parliament) the right to ask questions and get answers on supervisory policy, and giving states under the single supervisor along with the EP the power to remove the Vice Chairman of the supervisory body.

A couple of interesting points there. This is an incredibly fluid target but those who say that Germany has ‘gone off the idea’ of Treaty change – in light of David Cameron’s speech where he mentioned EU treaty change as an avenue for reform – clearly haven’t quite appreciated the nature of the proposals floating around. Of course, Berlin won’t be shouting it from the rooftops ahead of a national elections and with the relationship with France at an all time low (well almost), but in many of the Germans demand on eurozone governance is an implicit acknowledgement that something has to change in the EU’s institutional framework (see our table here of the broad proposals being discussed [p.9]).

The scope (limited or full treaty change), nature (EU treaty or inter-governmental) and timing will be discussed, but it will likely happen sooner or later.