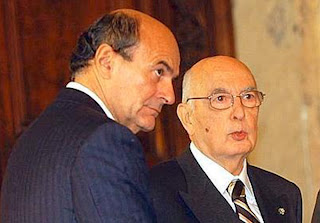 There were rumours of a further postponement until Good Friday, but Italy’s centre-left leader Pier Luigi Bersani has confirmed he will meet President Giorgio Napolitano tomorrow and report on the outcome of coalition talks with other political parties. The truth is talks haven’t gone particularly well. At the moment, Bersani doesn’t seem to have the numbers to win a preliminary vote of confidence in the Italian Senate – absent which the new government wouldn’t be allowed to enter office.

Clearly, Bersani’s failure to form a government would make snap elections more likely. But there is still some room left for negotiations. For the moment, we have tried to imagine the content of the meeting between Bersani and Napolitano (providing no eleventh-hour U-turns occur).

Scenario 1: Bersani admits he doesn’t have the numbers and asks for more time to strike a deal
This is fully possible, and it shouldn’t be a big problem for Napolitano to give Bersani more time for a second round of talks. However, it is unclear how much an extension of talks would change if none of the big parties moves from its current position.

Scenario 2: Bersani admits he doesn’t have the numbers, but asks to be sworn in anyway
Bersani’s reasoning here would be that, when the time to vote the confidence to the new government comes, some Senators (mainly from the Five-Star Movement) would break ranks and back him. This is a huge gamble, though. At the moment, even assuming that Monti’s Senators all vote the confidence to the new government, Bersani would still need at least 15 Senators to reach the minimum required majority of 160.

As such, Napolitano may not want to run the risk – and here is why. When a new government is sworn in, it must win a vote of confidence in both houses of the Italian parliament within ten days from the oath before it can enter office. If it fails to do so, it stays on as caretaker while the Italian President decides what to do next. But Napolitano is quite keen to keep Monti as caretaker instead – so he will probably only agree to swear in a government which can realistically win the vote of confidence.

A boring (but necessary) caveat before we move on to Scenario 3. It is possible for Italian Senators to leave the chamber before a vote, so that they are ‘absent’ when the roll is called. Absent Senators don’t count, meaning that the required majority goes down. Now, Lega Nord leader Roberto Maroni has hinted at the possibility of his and Berlusconi’s Senators leaving the chamber en bloc before the key confidence vote to a hypothetical new centre-left government – allowing Bersani to win the vote.

Of course, Maroni made clear this could happen only if “certain conditions” were met – including an agreement to elect a man close to the centre-right as the next Italian President next month. But this could potentially be a way out of the impasse.

Scenario 3: Bersani throws in the towel and hands his mandate back to President Napolitano
This wouldn’t automatically mean new elections – which, in any case, can only be called by the new Italian President when he enters office in mid-May. Napolitano would have to start a new round of talks and then decide what to do. As we explained in previous blog posts, the most likely outcome would be the Italian President proposing a temporary ‘national unity government’.

The new cabinet would be led by someone from outside of ‘traditional’ party politics (the word ‘technocrat’ seems to have gone out of favour in Italy these days) – but the ministers could indeed come from political parties. It is unclear whether Berlusconi’s party would grant its support, but this solution may have some chances of winning the Five-Star Movement’s backing. This ‘national unity government’ would pursue a clearly limited agenda, and pave the way for early elections – perhaps as early as next year, but with a new electoral law.

It’s all very much up in the air in Italy at the moment, but in case of a definitive breakdown of talks everyone will suddenly be reminded of which country should be the eurozone’s real concern.