No backing down: Germany comes out swinging over claims it is the neighbourhood bully 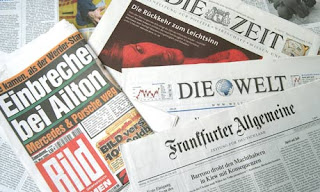 Given all the Germany-bashing over the last week, in the wake of the Cyprus bailout deal (some of it completely ridiculous), it’s easy to forget that the Germans themselves are remarkably united over the agreement. In fact, the feeling is that Germany, collectively, just got a fair bit more assertive over its eurozone policy.

On Friday, before a new agreement was finally reached and with Cyprus’ euro membership on the line, German Chancellor Angela Merkel – reportedly in an angry mood – told MPs from her coalition parties that it was wrong for Cyprus to “test” Europe and that while she preferred to see to see Cyprus stay in the single currency but was prepared for an exit.

And with respect to anti-German sentiments, speaking to ZDF this morning, Finance Minister Wolfgang Schäuble bluntly stated that:

“It is always the case, also in the classroom: When you sometimes have better results, the others, who have difficulties, can be a bit jealous.”

Meanwhile the opposition SPD and Greens have said they will both vote to approve the deal. It is not just German politicians who are being increasingly assertive. In our daily monitoring of the German press, we’ve sensed a hardening of tone and rhetoric throughout the crisis, not least in response to the overtly anti-German tone of many of the anti-austerity protests in the south. Referring specifically to the Nazi-themed nature of the protests, Ulrich Clauß argues in Die Welt that:

“In terms of the endemic prevalence of corruption in government and administration and in close to all parties in their respective parliamentary spectrums, these countries rank alongside third-world dictatorships. On the whole we are talking about countries in which ‘good governance’ seems to be an alien concept… in terms of political culture, there is an extreme divide between North and South in Europe.”

“The Cypriots like to see themselves as the victims. It is not however their European partners who are responsible for the mess they are in… In the crisis countries many blame their plight less on corrupt elites and bad policies but on the alleged lack of solidarity in the North for which read: neo-hegemonic Germany.”

“Politicians there have acted extremely irresponsibly. Now they are extremely brazen in their demands from those who have solidly managed their economies. Moreover, they insult those who are supposed to help them. Without German guarantees there would be no bailout fund. But of all things we Germans are being hit in the crisis countries not only criticism but even open hatred… If it was not an issue of Europe’s future, there would only be one appropriate response: deal with your own mess”.

Writing in Die Welt, Director of the Hamburg Institute of International Economics Thomas Straubhaar describes the Cypriot bailout deal as a “turning-point” in the eurozone crisis, arguing that:

“Up until now, the bankrupt countries have been able to use fear of a domino effect to extort Europe. That is now over because the strong eurozone countries have the better hand – and they should not be afraid to play it”.

The implications of a Germany more prepared to assert its viewpoint has huge implications for the future of the eurozone and the EU as a whole. Remember who holds the cheque book…