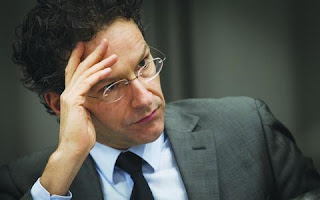 Everyone, including us, has commented at some point this week about how calmly markets have reacted to the situation in Cyprus.

“What we’ve done last night is what I call pushing back the risks…If there is a risk in a bank, our first question should be ‘Okay, what are you in the bank going to do about that? What can you do to recapitalise yourself?’… If the bank can’t do it, then we’ll talk to the shareholders and the bondholders, we’ll ask them to contribute in recapitalising the bank, and if necessary the uninsured deposit holders.”
“If we want to have a healthy, sound financial sector, the only way is to say, ‘Look, there where you take on the risks, you must deal with them, and if you can’t deal with them, then you shouldn’t have taken them on’”.
“The consequences may be that it’s the end of story, and that is an approach that I think, now that we are out of the heat of the crisis, we should take.”
“We should aim at a situation where we will never need to even consider direct recapitalisation…If we have even more instruments in terms of bail-in and how far we can go on bail-in, the need for direct recap will become smaller and smaller.”
“Now we’re going down the bail-in track and I’m pretty confident that the markets will see this as a sensible, very concentrated and direct approach instead of a more general approach”.

We’ve bolded the key quote. Essentially, he saying the Cyprus deal might be a template for other bank restructurings across the eurozone (although he seems to be trying to row back from this a bit).

Now, we’re not saying we disagree with his points and we certainly agree with the sentiment of his comments – banks should be able to shoulder their own risks and if they can’t they should have plans for winding down and deleveraging. This is why we’ve long argued for things such as living wills for banks.
Let’s be clear, banks should be responsible for their own risks. That said, if you go round telling markets all week that Cyprus is unique and specific and all year that a banking union is on its way with an ESM backed recap fund, they aren’t going to take kindly to abruptly finding out otherwise.
It all just seems a bit strange and a bit clumsy – to put it mildly. Sometimes for better or worse, markets need to be handled with kid gloves.
Contrary to his expectation that markets would see it as “sensible”, they have reacted wildly. Spanish and Italian stock markets have swung into negative territory after being up for the day, led by their banks taking a hammering, figures via @suanzes:

As we have said before, we never quite bought that Greece, Cyprus or anyone was entirely unique, though with Greece eurozone leaders definitely could have got away with it.
Where does this leave plans for banking union and eurozone integration? We’re hesitant to say tatters, but it’s not looking great.
Author : Open Europe blog team
Print