Italy: Will Bersani have any luck in forming the new government? 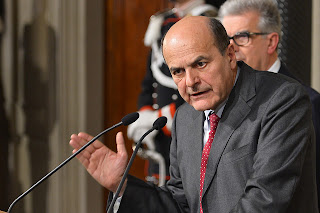 While the spotlight has firmly been on Cyprus these last few days, over in Italy centre-left leader Pier Luigi Bersani has just been given a mandate to try and form the new government by President Giorgio Napolitano.

Bersani has been explicitly asked to talk to other political leaders and report back to President Napolitano “as soon as possible” – we assume this will happen at some point next week. Basically, he will have to prove that his government would be supported by a majority in the Senate – the hung upper house of the Italian parliament – before he gets the definitive go-ahead.

So what happens next?

In the meantime, Mario Monti stays on as caretaker Prime Minister – he will leave office only after the new cabinet is sworn in. Keep following us on Twitter @OpenEurope and @LondonerVince to stay on top of events in Italy (and beyond).