Thinking about the plan in more detail, it occurred to us that this may amount to trying to burn the larger depositors twice. As we noted in today’s press summary, the plan essentially is to move all the bad assets to a bad bank, along with the large uninsured depositors (€100,000+). These assets would then be wound down or sold off at a large discount with the depositors footing the bill (and taking losses of 20% – 40%). This, along with the merging of Bank of Cyprus and the good bank, is how the recapitalisation costs will be reduced by €2.3bn.

So, the large depositors will take significant losses here and yet may still face a large deposit tax as well? That seems to be pushing the boundaries to us, although it is not impossible. Cyprus would not recover as destination for foreign investment for some time. One way to structure this could be for the tax only to be applied to depositors above €500,000 (as we suggest below) and the bad bank to apply to all uninsured deposits. Obviously, the bad bank scheme also only applies to Laiki bank, but as the second largest Cypriot bank it is still likely to account for a large amount of big deposits.

Still this could see larger depositors taking up to 50% hits in some cases. We can’t imagine Moscow would take that one lying down, especially given comments earlier in the week…

It now seems we have come all the way back round to the deposit levy as a solution in Cyprus. Overnight, the EU/IMF/ECB Troika rejected the plans for a Cypriot solidarity fund, particularly one based on pension assets and gas reserve revenues (which German Chancellor Angela Merkel specifically spoke out against).

The bank restructuring plan does seem to be holding water for now, so this has at least reduced the money Cyprus needs to raise by €2.3bn. Unfortunately, though, that still leaves €3.5bn to be found. As we noted a week ago, there are few options for doing it – and it slightly worries us that Cyprus and the eurozone are only just realising this.
Inevitably, that has led us back to a deposit levy. Fortunately, with the amount of money needed reduced, a new version can focus on larger depositors – which is reportedly what was originally proposed by the Troika last week. Barclays has a useful table on the breakdown of deposits (via @FGoria): 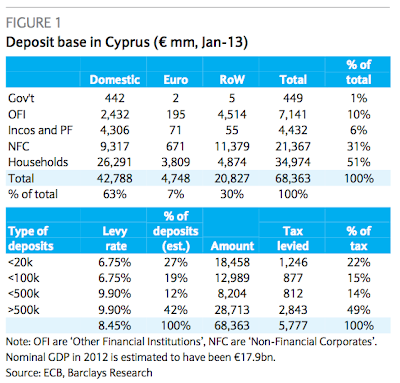 Going from these figures, a 12.2% tax on deposits above €500,000 would yield the €3.5bn necessary. A 9.46% tax would also be sufficient if applied to all depositors over €100,000.
Either of these options would probably be acceptable to the Cypriot parliament. Sources suggest that the Democratic Party (DIKO, Cypriot President Anastasiades’s junior coalition partner) has indicated its support for such proposals, which would bring the government up to 28 votes – so potentially needing only one more.
There are plenty of pitfalls left, but we may get a vote this evening. That said, noises from the Troika earlier suggested they could take the weekend to review the bank restructuring deal.
As has been the case for the whole of this week, uncertainty seems to be the order of the day. One thing we can take away is that a deal may be inching closer…
Author : Open Europe blog team
Print