While everyone is speculating about contagion to other eurozone countries: What are the Italian and Spanish press actually saying about the Cypriot bailout? 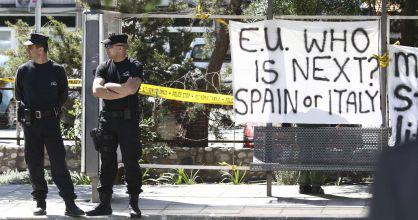 Analysts – led by Anglo-Saxon ones – have lined up to say that, following the deposit levy as part of the Cypriot bailout, a bank run on the rest of the Mediterranean is now a near certainty.

It’s as if the Europeans are holding up a neon sign, written in Greek and Italian, saying “time to stage a run on your banks!”

But for all these speculations, very few analysts have actually bothered to properly assess the mood and immediate reaction in Italy and Spain – whose depositors are meant to be lining up outside banks and cash machines to withdraw all their savings. Surely, the response and tone in the media of these countries on the day following the deal will give a pretty strong indicator as to whether Italian and Spanish depositors will perceive themselves as being ‘next in line’, or whether, in fact, they consider the Cypriot situation unique.

As Mats Persson argued on his Telegraph blog yesterday,

Fears of deposit-led contagion to other parts of the eurozone should definitely not be be overstated…viewed with a depositor’s eyes from Barcelona or Bilbao, Spain may have very little in common with Cyprus.

Of course, this is all very hard to predict and if talks about a bailout kicks of in Spain and Italy, will depositors trust what politicians are telling them? But what do governments and pundits actually say in these two countries? Put differently, what did Spanish and Italians depositors actually hear when they woke up to the news that their Cypriot counterparts will now see their savings taxed?

Italy has some relatively fresh memories of a deposit levy: the 0.6% prelievo forzoso from all Italian bank accounts enacted by the government led by Giuliano Amato in 1992, when Italian public finances were facing an “extraordinary emergency”. So one would expect the Italian media – and Italians themselves – to make a pretty big deal of the Cypriot bailout.

Not quite.  Although Italy’s borrowing costs have inevitably been driven up a bit by the news coming from Cyprus, the media is surprisingly relaxed (and certainly no queues outside ATMs). Of the largest Italian papers, only La Repubblica and La Stampa made some room for Cyprus on the front page of today’s print edition. Pope Francis and Italy’s own political troubles continue to dominate. However, some Italian commentators did flag up the risks involved in the Cypriot bailout for the rest of the eurozone.

Vittorio Da Rold of Il Sole 24 Ore calls the Cypriot bailout “a dangerous precedent which undermines confidence” in the eurozone.

Stuff like this can generate bank panic throughout the EU. [European leaders] are crazy.

There are no similarities between Cyprus and Italy…The markets are obviously nervous [over Cyprus], but I wouldn’t dramatise.

Several Spanish dailies ran with Cyprus as front page story today (see here). The most common reference in the Spanish press is to Argentina’s corralito – when Argentinians’ accounts were frozen to prevent a bank run in the country at the end of 2001.

As in Italy, there are no signs of Spanish depositors taking to the cash points – but the interest rate on Spain’s ten-year bonds has reached above 5% this morning. As in Italy, authorities have moved quickly to reassure the citizens that there is no risk of contagion spreading to Spain.

There has been some concern over contagion in the press, though, with Carlos Segovia, Economics Editor of El Mundo, writing,

Analysts from around the world start to doubt that Cyprus’s precedent may one day end up being applicable to other Southern European countries, even partially.

Under the headline, “We are a German colony”, the paper’s Washington correspondent Pablo Pardo goes all out,

The ‘bailout’ imposed by the EU [on Cyprus] is the closest thing to an armed robbery against that country’s savers.

Spanish economist José Carlos Díez is not happy either. He writes in El País,

The Cypriot bailout deal confirms that there are no signs of intelligent life in Europe.

Spanish business daily El Economista is a bit more relaxed, saying in an editorial that a Cypriot-style corralito is “unthinkable” in bigger eurozone countries like Spain, Portugal or Italy. But the paper also notes,

A haircut should have been applied to bondholders before applying [the deposit levy], which now comes out as an inconsistent measure.

So critical and concerned about precedent set, but no “panic spreads amongst savers” type headlines that we have seen in certain other countries. We certainly do not play down the precedent, or defend the deal, but one should not exaggerate either.

There’s no way this [the deposit levy] will be repeated in Spain or Italy, so it’s not clear when the great bank run is supposed to take place – not that bank runs are impossible by any stretch of the imagination in these economies, but a deposit tax or even the precedent set here is not likely to be the cause. That said, a real question remains over whether this will hamper future bailouts, future funding from the eurozone or even the fledgling moves towards greater eurozone integration. But that is a slightly different discussion.