The Great Cypriot Game – How important is gas to Cyprus’ economic and geopolitical future?

Russian Finance Minister Anton Siluanov has had some interesting things to say on the deposit levy (via Reuters):

“We had an agreement with colleagues from the euro zone that we’ll coordinate our actions.”
“It turns out that the euro zone actions on the introduction of the deposit levy took place without discussions with Russia, so we will consider the issue of restructurisation of the (Cyprus) loan taking into account our participation in the joint actions with the European Union to help Cyprus.”

It seems Russia is none too happy with the eurozone approach, unsurprisingly. If it does refuse to ease the terms of the €2.5bn bailout loan it previously gave Cyprus, it could hit Cypriot funding requirements, although probably not by a substantial amount. Still it could result in eurozone bailout funds being used to pay off a Russian loan in the near future – something which may not sit well with German taxpayers. Again, the interesting fall out will be to see how this impacts Russia’s approach to Cyprus and the EU more broadly.

In the middle ages, Cyprus was a key battle ground between great powers seeking dominance in the region. Well, the country – which, remember, only accounts for 0.2% of eurozone GDP – could become a hotspot once more (though we shouldn’t be over-excited about this).

According Greek Reporter, Gazprom made an offer over the weekend to the Cypriot government to fund the bank restructuring planned under the Cypriot bailout (which is set to cost up to €10bn) in exchange for exclusive exploration rights for Cypriot territorial waters. How reliable this story is remains to be seen, but it does hint at the geopolitical tension which we have been warning about.

Gazprom is known to be very close to the Russian government and despite Russian President Vladimir Putin overtly slamming the deposit tax – calling it “unfair, unprofessional and dangerous” –  it is unlikely that they would let this opportunity pass untouched. Fortunately, the Cypriot government is said to have rejected the deal off the bat, but if displeasure towards the eurozone and the EU grows, the Russian option may become increasingly appealing.

So how important is the gas element for Cyprus’ economic and geopolitical future? Well, there is no denying that Cyprus could potentially be sitting on top of gas reserves worth many times its GDP. However, as a revenue stream it is far from a sure thing. Here is how we put it in our flash analysis released on Friday:

Recent exploration has suggested Cyprus may have between €18.5bn and €29.5bn (103% – 163% of GDP) in untapped gas reserves lying in its territorial waters (according to Deutsche Bank). There have been rumours that this future revenue stream could be incorporated or used to backstop the bailout somehow. Although an appealing idea, there is still a huge amount of uncertainty around the real value of these reserves and how soon they can begin producing revenue

So far, one field has been explored (known as Block 12) and estimates of its potential value go as high as €100bn. See below for a useful diagram (via Baker Tilley): 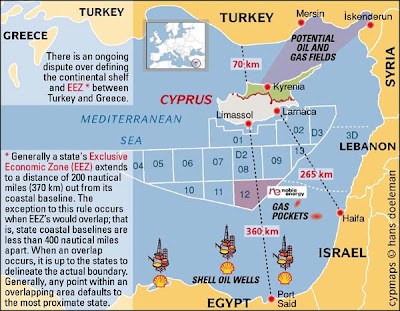 However, there are a few key points to remember when considering the impact of this on the Cypriot bailout:
To us then, the offer by the Cypriot government to provide Cypriot depositors with bonds linked to gas revenues sounds like a nice idea, but will not compensate these depositors for some years, at best.

But, remember with a view to Moscow, this is definitely one to watch.