Is there any chance Cyprus could secure a better deal? 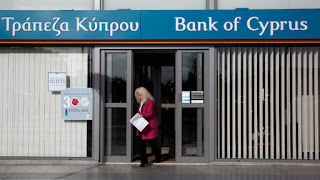 According to Reuters, German Finance Minister  Wolfgang Schäuble claimed today that it was indeed the Cypriot govenrment’s  decision to go for smaller depositors – not Germany’s.

“It was the position of the German government and the International Monetary Fund that we must get a considerable part of the funds that are necessary for restructuring the banks from the banks owners and creditors – that means the investors.”

“But we would obviously have respected the deposit guarantee for accounts up to € 100,000…But those who did not want a bail-in were the Cypriot government, also the European Commission and the ECB, they decided on this solution and they now must explain this to the Cypriot people.”

As we have pointed out, the bailout deal and deposit tax are still subject to Cypriot parliament approval, which is far from assured but looks likely.

In any case, questions are arising of whether there is scope to adjust the level or structure of the tax, with reports claiming that the Cypriot government is currently in talks with EU partners to revise the deal, possibly shifting a greater share of the burden to larger depositors. This would make the deal far more politically palatable.

Much of the outcry has been against the 6.75% tax on depositors below €100,000 – mostly ‘ordinary’ Cypriot savers. The perception is that EU leaders and the IMF imposed this on Cyprus. The question is, if the parliament rejected the deal – or with the threat of it rejecting the deal (still unclear whether there will be a majority for it in the Parliament) – could they perhaps push for the 9.9% rate for depositors over €100,000 to be increased, with a corresponding lower share for the lower end depositors? And are there possible progressive arrangements, involving several different depositor ‘brackets’?

It is possible, since technical details are still being ironed out (for example if you have €100,000+ will it all be taxed at 9.9% or part at 6.75%). However, the important point to note is that, although Germany was the driving force behind the tax itself, it seems that the Cypriot government played a role in designing it. Mainly, reports suggest that the Cypriot President Nicos Anastasiades was reluctant to return with a double digit tax on higher deposits as this would anger Cypriot businesses and investors as well as scare of foreign investors. In other words, Cyprus worried that this would kill the country’s position as an ‘offshore’ financial centre.
It has of course been reported that Germany and the IMF were pushing for a double digit tax initially – but on whom? Think about the maths for a second. The current structure raises almost €6bn. The max which the Eurozone was trying to cut of the bailout was €7.5bn. So, with €1.4bn in privatisations the target is reached. Logically this must mean the higher rate would have raised the same amount and therefore been applied to fewer depositors. This simple calculation suggests that the negotiations moved from a higher double digit tax on a specific group to a broader lower tax.
In any case, the important point to note is that the structure of the deal and the decision to hit ordinary depositors may not have been entirely a Eurozone one.
Whether the Cypriot government can or will change its position remains to be seen, but all of this suggests there should be some scope for a revised deal, though it would be far from ideal to keep the details unclear when markets open.
Author : Open Europe blog team
Print