A vote on whether to leave the euro? What’s next in Cyprus? 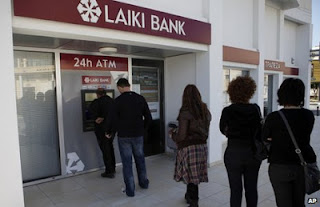 This will be another eurozone nail-biter.

The deal agreed by eurozone finance minister on Friday to tax Cypriot depositors (and some other conditions) in return for a €10bn bailout still needs to get passed some hurdles. As ever, there’s one huge “hurdle”: democracy.

The Cypriot parliament needs to approve the deal before it can become reality. The parliament was due to begin debating the issue today, but his meeting has now apparently been postponed. As things stand at the moment, the Parliament is due to hold a vote at some point before Monday night (although we imagine they will be under some pressure to get it done sooner rather than later. Monday is a bank holiday in Cyprus, but markets will be watching).

Here are some key questions about the next steps:

Could the Cypriot Parliament vote the package down?
A statement from the Cypriot President Nicos Anastasiades last night made it clear that he considers a No an effective vote to leave the euro. As in so many of these “desperately needed bailout meets parliament  scenarios, Cypriot MPs will probably be too frightened of the consequences to vote the package down. After all Cyprus is a very small country, having its own free floating currency is probably not a sustainable long term option, especially since leaving the euro would likely see a complete collapse of its banking sector and a very large default – very few people would have much trust in any new currency.

But a No is still not out of the question. As Kathimerini points out, the Democratic Rally (DISY) and the Democratic Party (DIKO), the parties which supported President Anastasiades in his recent election, do not have a majority – only 28 out of 56 MPs. AKEL the main left opposition party (which has 19 MPs) has said it will vote against the package, while DIKO has recently seen at least one MP who does not support Anastasiades split off.

The package may also get support from the European Party (2 MPs), but the Movement for Social Democracy and the Ecological and Environment Movement (5 and 1 MP respectively) have suggested they could vote against the deal.
So, currently the vote could be 30 in favour and 26 against.However, one of the reasons for postponing the vote seems to be to give the government more time to rally support, so it’s still a very fluid situation.

What happens if the Parliament rejects this deal?

Unclear. But it could be down to two options: either Germany and other creditor countries soften up the conditions, most likely on depositors, or Cyprus may be forced into default, which most likely means leaving the euro.

Political and popular support may align against the euro
And regardless, much of the population and at least half the political establishment do not seem to support this deal and although there may be few other options on the table in the immediate future, that could seriously undermine the country’s political stability or its long term membership of the Eurozone.
Pushing Cyprus closer to Russia?
As we have noted before, the geopolitics of the situation here are very delicate. Most other small European countries have few alternatives in terms of support structure, however, Cyprus has Russia. Russian support could begin to look increasingly attractive due to fewer overt conditions (although the more covert conditions are likely to be onerous). Comments by certain European leaders over the weekend have suggested the situation in Syria could escalate. As we have pointed out before, Russia has previously sought to move its only naval base in the Mediterranean from Tartus, Syria to Cyprus – an escalation could renew this desire while financial support could provide an avenue to make it happen.
This is of course a distant prospect, but the point is that, the political fallout of this move could be very significant not just within Cyprus but for the EU as a whole. This needs to be handled with utmost care…