This is getting personal: Handelsblatt likens ECB President Mario Draghi to the Little Corporal

Mystery solved. The good folks at Handelsblatt tell us that it’s indeed Karl XIV Johan of Sweden (original H/T @Presseurop). Apparently, there’s no particular reason for why they chose the Frenchman-cum-Swedish King, apart from seeking to depict Draghi as a 19th century sovereign.

Update 11:40AM:
People have pointed out to us that, in fact, it’s not Napoleon Bonaparte that is depicted. Handelsblatt isn’t exactly clear about who Mario Draghi has become on its front page, so we’re left guessing. The two strongest contenders are Napoleon III – founder of the Latin Monetary Union (and who was defeated by the Prussians in 1870) and Karl XIV Johan of Sweden (who was one of Napoleon’s generals but after being imported to Sweden to serve as a King, he eventually ended up fighting the French). The latter would imply a very high level of assumed knowledge. to say the least. We wonder what our readers think? 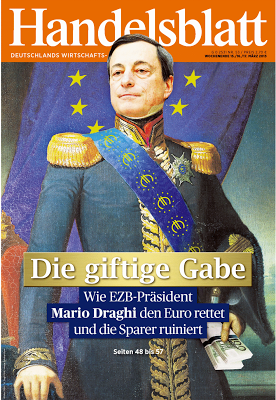 “The toxic gift. How ECB President Mario Draghi is saving the euro while ruining savers”.

The article inside goes on to argue that:

“as a result of the cheap money policies (…) new bubbles are emerging, insurers are suffering and savers threaten to lose their savings”

“central banks must be the trusting anchor of the paper money regime. When they don’t do this and are being overburdened with all kinds of new tasks, this fragile system is under threat.”

The Napoleon reference probably has several different levels to it, but one thing is clear: it’s not meant to be a compliment. Although German fears of inflation and lose money are well known this is getting personal.