Are Greek banks improving or struggling for liquidity?

Those who followed our analysis of the Greek bond buybackwill remember that we warned at length that it could have some adverse effects, one of which would be to hit bank liquidity at a time when Greek banks could least afford it.

In the end Greek banks were pushed to take part by the government but their resistance (despite being reliant on the Greek Central Bank for liquidity and the eurozone for a recapitalisation) was quite telling.
In any case, data is now beginning to emerge which sheds some light on the issue but also provides plenty of questions (as always with Greece data releases are some months behind elsewhere so the latest data available is for January 2013).
Greek bank borrowing from the ECB and the Greek Central Bank (via ELA) has dropped significantly since the bond buyback at the start of December (down €21.3bn since November 2012). 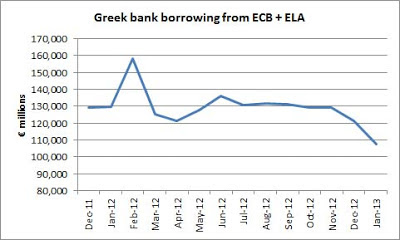 Now, normally a sharp drop in borrowing from the ECB and ELA would be a positive thing since it suggests reduced reliance on official funding. However, in this case, we suspect that rather than improving their position, banks are actually struggling to find sufficient assets to post as collateral with the Bank of Greece to gain liquidity.
Other factors do support this argument. The Bank of Greece annual accounts show that the overall collateral pledged for central bank liquidity fell by €11.7bn in the aftermath of the bond buyback, while borrowing from the central banks fell by €7.5bn (data for January is not yet available). Furthermore, with total assets pledged for collateral still totalling €217.1bn or 50% of all bank assets in Greece it is easy to imagine that the banking sector is working under significant collateral constraints.
Are there any other potential explanations?
Well, the first would be that banks repaid their borrowings from the ECB’s Long Term Refinancing Operation (LTRO) in January. This seems very unlikely. The LTROs coincided with a period of extreme turmoil in the Greek banking sector due to the Greek debt restructuring, a period in which Greek banks could not access the ECB. Therefore, it is unlikely that Greek banks borrowed much if anything from the LTRO. Besides, if they did, it seems strange that they would give back a key source of long term funding early.
The second explanation could simply be that confidence has returned somewhat. There is some evidence to support this, not least the return of domestic deposits, which have increased by €12.1bn since November 2012. However, that still leaves a drop in central bank borrowing of €10bn which does not seem to have been filled by other sources of liquidity.
Lastly, the bank recapitalisation is being enacted, which could reduce the Greek bank demands for liquidity, although since it isn’t expected to be completed until end of April it would seem strange if the impact showed up this early on.
Overall then, there seems to be some strong evidence that the Greek bond buyback has hit the liquidity access of Greek banks, albeit not in a catastrophic way. More importantly though it has happened at a time when credit provided to the real economy continues to contract and economic growth remains some way off.

Update 16:30 13/03/13:
@EfiEfthimiou has flagged up a good point over email. In December 2012 the ECB began accepting Greek government bonds as collateral again, this allowed banks to switch from using the more expensive ELA to standard ECB liquidity. The haircut on collateral may also be lower under standard ECB lending (we can’t be certain since ELA terms are secret). This could have allowed the banks to reduce their liquidity needs and the level of collateral posted – another potential explanation then.