Will the German Social Democracts come out in favour of debt pooling in the eurozone? 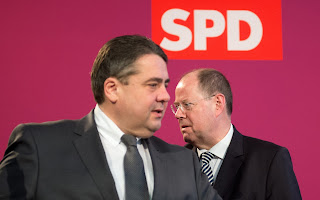 Last year we highlighted the German opposition’s somewhat ambiguous position on the hugely controversial proposition of debt mutualisation in the eurozone. However, with September’s elections rapidly approaching, it seems the SPD could have nailed their colours to the mast and have come out in favour, with their draft manifesto – launched yesterday by the party’s chancellor candidate Peer Steinbrück and party chairman Sigmar Gabriel (pictured) – claiming that the subject can “no longer remain taboo” according to Die Welt.

With the manifesto not yet publicly available (it has to be approved at the party’s national conference on April 14), we cannot be sure what form this would take – more limited mutualisation via a so-called debt-redemption fund or more extensive debt mutualisation via commonly issued eurobonds. With the German electorate reamining firmly against dept pooling, we suspect the former.

The party has also come out in favour of expanding the role of the European Commission into a ‘European government’ subject to control by the European Parliament and a second chamber where national governments would be represented, although it must be said that this concept has already been floated both by Angela Merkel and also by the ‘Future of Europe’ group chaired by Guido Westerwelle.

It will be interesting to see what effect – if any – this has on the SPD’s electoral fortunes (we can imagine that the new ‘Alternative for Germany’ anti-euro party making this a big issue). At the moment the party is struggling to break through the 30% barrier in opinion polls and has been as low as 23% in recent weeks.

In addition to the dynamics of German domestic politics, from the perspective of the UK, this debate is both interesting and relevant given that any of the changes proposed above would require changing the EU Treaties, thereby giving the UK the opportunity of putting forward some reform proposals of its own, as suggested by David Cameron in his recent speech.