Are anti-euro sentiments brewing in Austria? 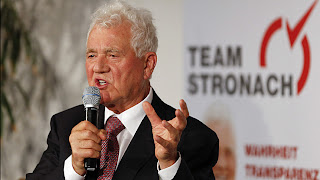 Last weekend in Austria, “Team Stronach”, a newly-founded political party which aims to abolish the euro in its current form, did quite well in two regional elections, winning 9.8% in the state of Lower Austria and 11.3% in the state of Carinthia.

The party was founded by Austro-Canadian billionaire Frank Stronach (pictured) who wants eurozone countries to have their own currencies whose value would fluctuate in line with their fiscal and financial strength (while toying with the idea of keeping the euro as a parallel currency). Although Stronach reacted by saying that “you always expect more”, the party “passed the litmus test”, according to David Pfarrhofer of the ‘Market’ polling institute.

This year, it’s Superwahljahr (Super Election Year) in Austria with two more regional elections coming up in Tirol and Salzburg, and general elections on 29 September, with Stronach stressing that he is “very optimistic”. Unsurprisingly given that he named the party after himself, he confirmed he’ll be its leading candidate with the aim of becoming Austrian Chancellor. Currently his party is polling at around 10%.

Team Stronach already has a faction in the Austrian Parliament, composed of MPs which defected from other parties to join. This provides the party with some public funding in addition to the reported €26m Stronach himself has contributed. Speculation that he would attract Arnold Schwarzenegger, another successful Austrian expat to his party, has been denied by the latter. Stronach is one of the most prominent business people in Canada, where he emigrated to at the age of 22. His party has been accused of populism but unlike Austria’s established far-right, it is not opposed immigration.

Combined with support of around 20% for the far-right FPO party, which supports a Northern euro, around 30% of Austrians seem to support parties which favour an end to the common currency, and unlike in Germany, it seems people are actually willing to vote for parties which explicitly support this objective.  Stronach has a solid organisation and apart from shaking up Austrian politics, the signals he’s sending out could spill over to that one country which more than any other holds the fate of the euro: Germany.