And who are you again? Grillo’s MPs and Senators meet each other for the first time 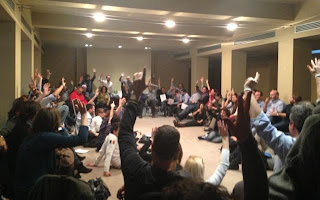 163 MPs and Senators-elect from the Five Star Movement met in Rome yesterday and today. As an initial party meeting after a general election it was quite unusual: despite belonging to the same party, most of the elected representatives had never heard of each other before, let alone met. Beppe Grillo himself did not know many of them, and that’s why he joined the meeting today – along with the Five-Star Movement’s media guru Gianroberto Casaleggio. Remember, the Five Star Movement selected its candidates through an on-line survey, so no face-to-face contact involved.

This shows just how far away the Five-Star Movement is from being a traditional political party – by any standard. And there’s some more stuff:

Incidentally, the faction leader in the Italian Senate is Vito Crimi, a 40-year old (the minimum legal age to be elected as a Senator in Italy) judicial assistant from the Northern town of Brescia.  The faction leader in the Chamber of Deputies, the lower house, is Roberta Lombardi. She is 39, holds a degree in Law and works for an interior furniture company.

Whatever one thinks of the Five-Star Movement, it was quite impressive to see so many Italian MPs in their thirties (or even twenties) in the same room. Finally some fresh air in Italian politics, some might say. We still don’t know what the Five-Star Movement will do next. Grillo made a quick appearance at the very beginning of the meeting today, saying that the Movement will only vote for the laws which fit with its manifesto – but he said that several times before.

It remains to be seen how this enthusiastic but inexperienced lot will react when the new Italian parliament convenes – on 15 March, or a bit earlier – and talks on the formation of the next government enter their decisive stage. The time for post-election celebrations may already be over for the Grillini. The question is: will this innovative approach to party politics hold (think party discipline) when things get serious?