How does our prediction on Spanish regions’ deficit stand up?

Last July, we put together this ‘traffic light table’ of Spanish regions, based on how much each region had to cut its deficit by in order to meet the 2012 overall target of 1.5% of GDP (click to enlarge): 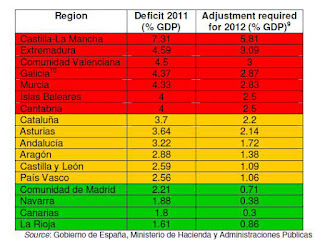 The official deficit figures for Spanish regions were published yesterday, so let’s see how our table stands up. Unsurprisingly, Spanish regions have missed their overall target, but by a lower than expected margin. The final figure for 2012 is 1.73% of GDP – only 0.23% above the target.

Five regions have missed their individual targets (well, six if you want to include Castilla-La Mancha, which is on 1.53%, but that may be a bit harsh given that they have achieved an adjustment of close to 5.8%). Three of them (Murcia, Comunidad Valenciana and Balearic Islands) are in the ‘red’ region of our table. The remaining two (Catalonia and Andalusia) top the ‘amber’ region.

Credit where credit is due (and we’re not just talking about the accuracy of our prediction). Some regions have managed to achieve a very substantial deficit reduction to meet their targets. Think of Castilla-La Mancha or Extremadura, for instance, which started from 7.31% and 4.59% respectively. However, the fact that the country’s two most populous regions – Andalusia and Catalonia – remain among the most undisciplined despite receiving billions from the Spanish government’s dedicated bailout fund is clearly a source of concern for Mariano Rajoy’s government.