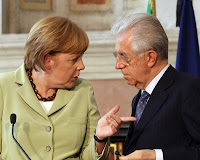 Mario Monti has never claimed to be a professional politician. His lack of political experience became evident when he said,

[German Chancellor Angela] Merkel fears the success of left-wing parties [in Italy], especially in an election year for her. I don’t think she has any desire to see [Pier Luigi Bersani’s] Democratic Party arrive in government.

Merkel’s spokesman, Steffen Seibert, quickly shot Monti down.The German Chancellor “has not made comments on the Italian elections. Nor did she do any in the past”, he said.

Though it may seem like a minor event, the Italian press was all over it. And it’s interesting as it may play straight into Silvio Berlusconi’s hands. The man has built his election campaign on strong and uncompromising anti-German austerity rhetoric. He might be minded to ask if Monti cares more about Merkel than Italian voters?

This also illustrates how potentially counterproductive it is for German politicians to wade into the Italian election debate. Merkel may not endorse a candidate, but it is pretty obvious who the Germans don’t want to see in power.

I know very well that Silvio Berlusconi is a very effective electoral strategist. However, I’m convinced that Italians are clever enough not to make the mistake of voting for him again.

Another senior member of Merkel’s CDU, Ruprecht Polenz, who chairs the Foreign Affairs Committee in the Bundestag, said,

Italy needs leadership for the future. Berlusconi does certainly not represent that.

Whoever forms the new [Italian] government, we count on the pro-European course and the necessary reforms to continue.

The more extraordinary since these politicians are all supposed to be Berlusconi’s ‘fellow’ centre-right politicians. Now, the big question is, will this kind of stuff coming out of Germany boost or reduce Berlusconi’s chances, given that it fits perfectly within his narrative that Italy is being kicked around by Berlin? Remember when a whole host of Europeans lined up to oppose George W. Bush (not that we compare the two) in 2004, acting as the ideal recruitment sergeants for the Bush campaign…

If you want to know what we think about Berlusconi, the Italian elections and what they mean for the future of the eurozone, check out our new briefing outlining a number of post-election scenarios. And follow us on Twitter @OpenEurope or @LondonerVince for real-time updates from Italy.