Sign of the times? Anti-euro comedian could come second in the Italian elections 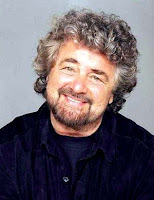 This story most certainly caused officials in Brussels and Berlin – at least those who read the Italian press, or alternatively our daily press summary which was the first to break the news in the international sphere – to choke on their morning cappuccino.

It’s true that the international media has over-stated Grillo’s anti-euro stance – Europe is not one of the Five Star Movement’s key pillars. But Grillo is definitely toying with the idea of Italy ditching the euro, and has said Italy should hold a referendum on its membership of the single currency. He has written stuff like this on his blog, for example:

In order to remain in the euro, we are starving the country…If we had the lira, we could solve our debt problem through a devaluation of our currency.

So think about it again: an anti-euro politician may finish second in the Italian elections – Italy arguably being the most pro-EU country of the lot.

And there’s an element of panic going on.

In an interview with Le Figaro, Italy’s former Foreign Minister Franco Frattini (who is also a former EU Commissioner) says,

I don’t rule out [Grillo’s Five-Star Movement] finishing second…This would be a tragedy comparable to [far-right leader] Geert Wilders’ irruption into Dutch politics. One would then need to take into account the failure of the European idea in Italy.

These polls also raise serious questions over whether whether Mario Monti’s centrist bloc will win enough seats to be the kingmaker in the Italian Senate.

As we said: uncertainty still reigns in Italian politics.