Another tricky morning for the eurozone

It’s been a somewhat less than pleasant morning for the eurozone. Firstly, the European Commission put out its latest economic growth forecasts, which do not make great reading for many countries. Here is a comparison between the EC’s forecasts and the latest national government forecasts for growth: 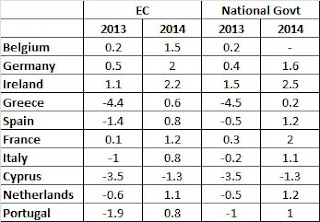 As the table shows, there is a long list of countries which seem to be overestimating their growth for this year including: Italy, France, Spain, the Netherlands and Ireland.

We expect to see a series of growth revisions throughout the year on the part of national governments – in some cases such as Greece, we expect that the Commission forecasts will also prove overly optimistic (notably the figures used in the Greek budget are actually below the Commission forecasts). The figures also highlight the growing cracks in the Franco-German axis as the two countries diverge economically; this was reinforced by the starkly different PMI (business activity) figures yesterday.

The implications of these inflated growth projections are also becoming apparent. Nowhere is this clearer than in Spain, where the Commission highlights that, without additional measures, the Spanish government deficit in 2013 and 2014 will be 6.7% and 7.2% of GDP respectively. This compares to targets laid down by the eurozone of 4.5% and 2.8% respectively.

The Commission’s estimates of Greek unemployment also still seem unrealistic, at 27% and 25.7% in 2013 and 2014. In November 2012 unemployment reached 27% in Greece, according to the Greek statistics agency. With plenty of structural reforms still to go we expect this figure to increase further.

Secondly, the announcement of the repayment of the ECB’s second Long Term Refinancing Operation (LTRO) came in significantly lower than expected – 356 banks repaid €61.1bn compared to average expectations of €122.5bn. The steep slide in the euro exemplified the market response.

This highlights that underneath the recent optimism there is still significant fragmentation in financial markets and concerns over liquidity (as we have noted previously). Although impossible to tell conclusively, since these are just aggregate figures, we expect that many of the banks that have repaid were from ‘core’ eurozone countries, further exacerbating the differences between eurozone countries.

If you are looking for a silver lining, it could be that the rise in the euro has been halted for now, which may aid the competitiveness of the weaker countries, and that a potential de facto tightening of monetary policy has been avoided – this could have been a concern if banks repaid the LTRO and deleveraged rather than investing the collateral elsewhere.

The picture emerging from this morning’s data, then, continues to be a bleak one for the eurozone thanks to stalling growth across the bloc and banks hanging onto ECB liquidity. Beyond the headlines though, there is evidence of growing divisions as some of the core countries post growth and their banks repay ECB funding while peripheral countries find themselves in economic decline with banks surviving on ECB money but lending little.