Tackling the slow, painful decline: A bad day of economic data for the eurozone

Some have said the worst of the eurozone crisis is over – this morning’s economic data did not provide much support to their argument. 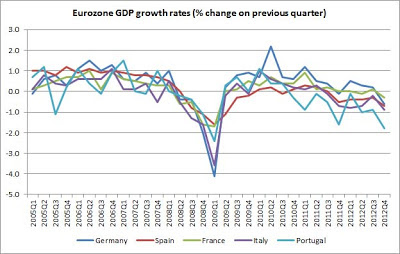 Top of the list are the growth figures for the eurozone in Q4 2012 – as a whole the bloc contracted by a massive 0.6%. Maybe not a huge surprise but still worse than most expected. Furthermore, there were few glimmers of hope.
As the graph above shows, Germany posted a contraction of 0.6%, Italy 0.9% and Portugal a massive 1.8% (more on this in a minute). France’s 0.3% contraction looked relatively mild, although it confirmed that the French economy saw zero growth in 2012 – it also put pay to any hopes of the French government achieving its growth projections for 2013 or its deficit target (see here for more on this). For all of these countries, this was the worst quarterly growth performance in almost four years (2009Q1).
The Italian statistics agency confirmed that growth for 2012 was -2.2%, a timely reminder of Italy’s real problem – an endemic and chronic lack of economic growth. The absence of any credible policy for correcting this in the current electoral campaign should be of grave concern to all of Europe.
Portugal was undoubtedly the stand out performer, but not in a good way. The 1.8% contraction in the final quarter brought the annual real terms contraction in 2012 to 3.2%. This result, along with the German contraction (which was put down to a collapse in European demand for German exports), highlights the substantial risk of expecting export lead recoveries to materialise when the entire eurozone is in a recession. The stumbling growth in the US and China at the end of 2012 likely created a further drag.
In fact, the only countries to provide any strongly positive data were the smaller central and eastern European economies – particularly Estonia, Latvia and Lithuania. Some would highlight that these are the countries that have already completed a significant round of structural reforms and internal devaluation. In any case, they are far from large enough to help pull the rest of the eurozone out of its current slump.
Meanwhile, the Greek statistics agency Elstat also released its figures for Greek unemployment in November 2012. Overall unemployment reached 27%. As we have noted many times before, this far outstrips the EU/IMF/ECB troika estimate for the end of 2012 which was 24.4% (this is even after it was revised upwards significantly in the IMF’s January report on Greece).

More worryingly though, youth unemployment has reached a whopping 61.7%. Think about that figure – it’s absolutely extraordinary, especially when compared to the fact that it was only 28% three years ago. We can’t help but wonder how long such high levels of unemployment can be sustained before the political and economic impact becomes too heavy for the state to carry alone (i.e. before Greece demands further eurozone funding and concessions on its reform programme). Again, the risk is that the very fabric of Greek society could start disintegrating under such sustained pressure.

There has been plenty of optimism around the eurozone recently, some of it warranted and we should relish this. But this data should be a timely reminder of, arguably, the biggest challenge of them all for the eurozone: how to reverse the trend of slow, grinding decline.

If EU leaders thought for one minute that there were room for complacency, they can think again.