Exclusive: How is the new EU budget shaping up – latest draft!

EU leaders look to be closing in on a deal on the 2014-2020 budget (MFF). We will be updating this blog throughout the day.

UPDATE – 10:58am: Talks set to resume at 12pm GMT. Van Rompuy will table another compromise proposal. It seems Romania, Bulgaria, the Czech Rep and Latvia were unhappy with the proposal circulated this morning, which we have analysed below. Austria’s rebate has also been scrapped, which could be another stumbling block.

10:00am: We have obtained the latest draft that is being circulated, and it appears there is tentative agreement on the headline figures, and it’s looks very close to what we predicted.

The headline figures are:

€999.56 including off-budget items
€959.96 in commitments
The figure for payments is less clear but the figure €908bn has been widely cited. 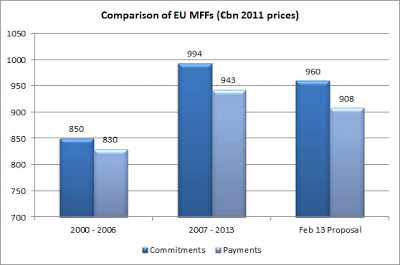 As we can see from the graph, this would represent a real terms cut compared to the current 2007-13 MFF – the first time that a cut would have been achieved. So, David Cameron can plausibly claim to have lived up to is promise of coming away “with at best a cut, at worst a freeze.”

It’s worth noting that the gap between commitments and payments has increased (see here for more details on this). As we have noted before this could potentially mean payments increase in 2020-2026 budget period to cover the amount of money already committed. The scope to potentially increase payments through QMV during the budget period could also be problematic although it would be a unprecedented move.

On the UK rebate and other ‘corrections’, the current draft says:

“The existing correction mechanism for the United Kingdom will continue to apply.”

So, Cameron remains on solid ground.

The current draft also includes lump sum rebates for the Netherlands, Sweden and a new rebate demanded by Denmark. Germany, the Netherlands and Sweden would benefit from caps to their VAT-based contributions. It appears Austria’s rebate would be scrapped. This could still flare up as an issue with Austrian Chancellor Werner Faymann previously stressing his country would not be the only one to give up its rebate.

This is how the current draft would distribute the cash among the EU’s policy areas, compared with the current budget and the November Van Rompuy proposal: 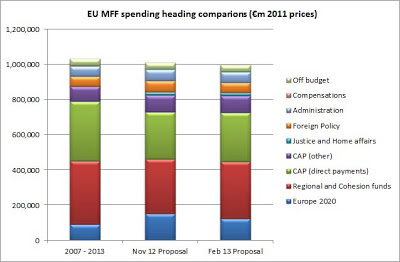 As we can see in the graph, the latest proposal cuts spending on “competitiveness and growth” (Europe 2020) by €27bn – not exactly a positive, as this includes R&D and energy infrastructure, foe example. At the same time spending on the CAP has increased by €9bn while spending on regional and cohesion funds has gone up by €15bn, both compared to the proposal in November (presumably split between new and old member states). As we have said before, this locks in the worst parts of the EU budget in terms of outdated and potentially growth destroying spending.

Despite, securing a real terms cut to the EU budget, the UK’s net contribution (what it pays in to the EU after the cash it gets back and rebate are taken into account) would still go up under this proposal.

This is because the share of the EU budget going to the new EU member states – the ones that have joined the EU since 2004 – will increase. Since this share is not covered by the UK rebate, Britain gets no cash back for its share of the money spent there. This could prove politically sticky for the UK government when explaining the figures to MPs and the opposition – though it’s likely to heap the blame on Tony Blair for giving up part of the rebate in 2005. However, at the same time, more money (though not nearly enough) will be invested in poorer member states, where it can have the most impact, rather than being recycled unnecessarily between rich member states, at a huge administrative and opportunity cost.

It’s also worth noting that, due to the payment ceiling being much lower than expected and there being a large gap compared to commitments, it is possible that actual payouts (especially in later years of the budget) go above the payment ceilings. This again could prove problematic for the UK to communicate.

Will the UK’s gross contribution go up?

The UK gross contribution should be falling in real terms since the budget is falling in real terms. However, due to the fact that actual payments may top the payments ceiling (as we explain above), it is hypothetically possible that the UK’s actual gross contribution could occasionally top the ones seen under this budget framework – this seems unlikely but is uncertain.

As we explained here, payments ‘trail’ commitments. In the context of an ever-increasing budget that didn’t present a practical problem, because extra funds would always be pledged to meet previous commitments. Now we have a situation where payments are falling well below the level of commitments that the EU is able to make under the current budget, potentially creating a deficit. As the Commission is always at pains to point out, these bills need to be paid. The obvious answer is to increase payments, which would impact on the UK’s gross contribution. How much, remains an uncertain question.

One interesting thing to note is that a commitment to continue working on a direct stream of VAT revenue to the budget, to replace the existing VAT contributions to the budget. There is also a vague commitment to examine using the enhanced cooperation FTT as revenue for the EU budget in the future. However, this would not affect non-participating member states or the UK rebate.

Some potential obstacles to a deal remain, but this seems to be a positive starting point for a deal. The UK can plausibly say it has received a decent deal if something close to this proposal comes into force. Unfortunately, the budget as a whole will remain poorly targeted and outdated.