Could the EU budget be cut for the first time?

The rumours are flying in thick and fast from Brussels regarding the latest EU budget numbers and the likelihood of a deal. The range estimates we laid out in our briefing still stand up, with several suggestions that Herman Van Rompuy’s latest proposal will be for €959bn in commitments and as low as €913bn in payments. In terms of figures this would represent a significant victory for the UK and other states that want to see budgetary restraint. Below is how such a deal would compare to Van Rompuy’s November proposal, and more importantly, the current long-term EU budget (MFF). 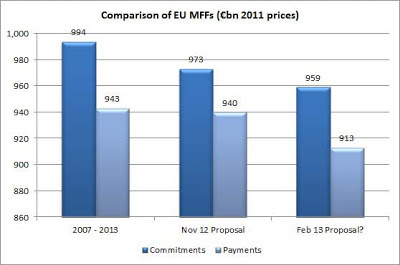 Of course there are still plenty of twists and turns to come in the negotiations, not least how the headline figures above are distributed across the different headings such as the CAP, structural funds, administration etc. Follow us on twitter for the latest developments.