From Amsterdam to Brussels with love? 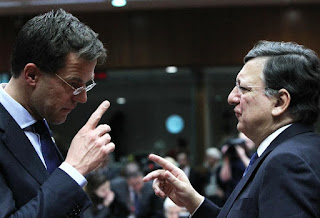 Events may have conspired to prevent David Cameron from delivering his Europe speech in Amsterdam as originally planned but it has still managed to create political waves in the Netherlands.

It is rare for statements from foreign politicians to be the focus of parliamentary debates but last night the Dutch Parliament held a debate specifically on Cameron’s speech. Halbe Zijlstra, the parliamentary faction leader of PM Mark Rutte’s VVD party argued that “Cameron’s speech is a more extensive version of the European chapter of the Dutch coalition agreement.”

The relevant section of the Dutch coalition agreement reads:

“The Netherlands asks the European Commission to inventarise, on the basis of subsidiarity, which policy areas can be transferred to national authorities and will put forward such proposals itself.”

Indeed Rutte has himself quipped that what will take Cameron two years (i.e. the FCO’s Balance of Competencies Review), will take the Dutch Cabinet 6-7 months. Last week, in a joint letter together with Finance Minister Jeroen Dijsselbloem, Rutte also reiterated the VVD/PvdA coalition’s desire for member states to have the right to opt out of individual EU policies, such as the Schengen zone and the eurozone, or from the EU altogether.

Yesterday, in an effort to apply pressure on the coalition in this area, Sybrand van Haersma Buma, the leader of the centrist Christian Democratic Party (currently in opposition but historically a party of government), claimed that “Europe is indulging too much in all kinds of over-detailed rules”, and put forward his party’s own detailed list of areas in which Brussels should not be involved:

This is going much further than Cameron, who did not present a ‘shopping list’, only mentioning general policy areas such as social and employment law and environmental legislation. Interestingly though, many of the above fall into those two categories. Specifically addressing Cameron’s position, Buma said:

“He’s right…let’s go back to what Europe was originally all about…What I want is for several countries to decide together that [certain] matters can better be regulated domestically. A Europe à la carte isn’t a good idea…We must get rid of the idea that if you want less Europe, it means you’re against Europe from the start.”

This is set to increase the pressure on the VVD-PvdA coalition which will try to agree in the coming months on their own list of policy areas which should be dealt with nationally, and which the government can use as the basis for any negotiations in Brussels. PvdA MP Michiel Servaes reacted by saying that Buma was only “following the line set out earlier by the cabinet”, but that Buma’s list was “a big leap” which ought to be carefully considered and discussed with other countries.

Meanwhile, on his Elsevier blog, Dutch Professor Afshin Ellian, a well-known political commentator, described Cameron’s stance as “a third, more pragmatic way between europhobia and europhilia”, while in a letter to NRC Handelsblad, nine prominent Dutch professors and academics argued that in order to bridge the gap between EU centralisation and EU citizens, the Netherlands should also have a referendum on its future in the EU, an option supported by 52% of Dutch citizens according to a recent opinion poll.

As we suggested in our analysis ahead of last September’s Dutch elections, in the medium to long term the Netherlands “could well be on the path to becoming a more assertive – and far more complicated – EU partner.”