Is the SPD in crisis? 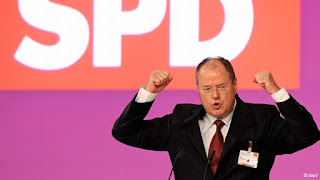 A new Stern-RTL poll out yesterday, widely reported in the German media, has Angela Merkel’s CDU on 43%, and the SPD, the main opposition party on only 23% – its lowest since July 2011 and equal to the actual share of votes won in the 2009 elections. Not being able to better this after a spell in opposition would be seen as disastrous, and could suggest Germany’s longest serving political party is in long term decline: 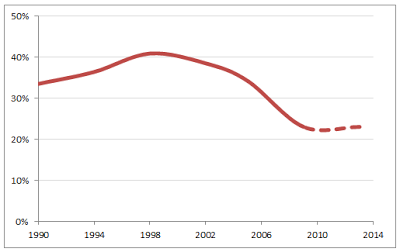 Equally worryingly for the party, its Chancellor candidate (German parties don’t have fixed ‘leaders’) Peer Steinbrück gets absolutely thrashed in head to head polling with Merkel, only winning 18% to her 58%. This has led to other senior figures in the party having to deny speculation that he could possibly replaced. Notwithstanding the confusion and mixed signals this would cause, the SPD doesn’t really have a credible ‘Plan B’ – Steinbrück – a successful Finance Minister during the 2005 – 2009 Grand Coalition – easily won the nomination ahead of other potential nominees.

The poll highlights Merkel’s remarkable electoral resilience and highlights the extent to which she is seen as a safe pair of hands during a period of huge economic and political uncertainty. It remains to be seen how the SPD will respond to this dire polling, for instance, could it be tempted to more strongly differentiate its eurozone policy which rhetoric aside has been relatively close to that of the government?

Of course we still have a long way to go till September, and plenty could happen in the meantime, especially given the low growth forecast for the coming year. Equally, given the country’s electoral system, a change of a couple of percentage points for any of the parties could produce radically different government constellations; a continuation of the CDU-FDP coalition, another Grand Coalition, a SPD-Green coalition, even a CDU-Green coalition has been suggested. The result will be significant for the rest of Europe including the UK, as Merkel is more likely to be sympathetic to EU reform than the SPD or Greens.

This Sunday’s regional elections in Lower Saxony will be an interesting forerunner as in a reflection of the national trend the CDU – led by the popular half-German half-Scottish David McAllister – is clearly in the lead, but in the absence of a coalition partner, with the FDP below the the 5% threshold, power could pass to a SPD-Green coalition.