A new angle to UK-EU trade?

The WTO and the OECD yesterday announced the release of a new set of trade data. This data tries to pin down the “value added” from trade rather than just the gross figures. Essentially, this means the data tries to track where the final demand for an exported product/service comes from, thereby netting out trade which simply contributes to the production line of the finished good/service.

The data provides an interesting new contribution to the UK-EU debate on trade. Notably the figures highlight that, under the value added approach, US trade looks more important to the UK than European countries. The Guardian questions whether this could aid the calls for the UK to exit the EU. 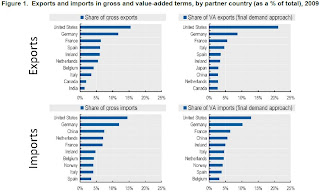 Superficially it may, but looking at the data more deeply, we think not. As the WTO/OECD note:

“This suggests that UK exports to other EU countries are at least partly intermediate services and inputs that are then further processed and shipped to other countries (in particular to the US).”

So, although the US is the source for the ‘final demand’ we still have to export our products or services to other countries in the EU for them to take advantage of this demand. Being a member of the EU and the single market plays a big role in allowing us to do this. The real question is, would the UK still be able to access this final demand from the US if it left the EU?
Well, it’s almost impossible to say. One thing that seems certain though, is that, since many of these exports are intermediate ones, there is no guarantee that we would still be able to export them outside the EU even if the final demand remains from the US (this point is hinted at by Ian King in the Times).
A final interesting point is that the increase in value added exports to the US seems to occur for most large EU countries. Why this is, is not entirely clear. To us, it seems that it could be motivated by specialisation within the EU, with EU members producing various component goods and services which are then combined into final exports to the US. If this is the case then this seems a positive result to us, as it surely increases the cost competitiveness of exports from the EU (including the UK).
From the perspective of the UK/EU debate this ‘value added’ data is another interest metric to add, although at the moment it offers little more conclusive evidence than what we currently have. The bigger benefit comes in broader terms, as the FT notes, providing further support for free trade. With protectionist forces flaring up during the eurozone crisis, countries would do well to keep that in mind as well.