Draghi getting ahead of himself: are we really seeing a “normal situation” in eurozone financial markets?

In his monthly press conference on the 10 January 2013 ECB President Mario Draghi struck a relatively upbeat tone on eurozone, in particular arguing that the eurozone was returning to a “normal situation, from a financial viewpoint”. Don’t get ahead of yourself there, Mario.

True, he also warned against a slowdown in fiscal consolidation and structural reforms due to political complacency, but hinting that we’re now back to a normal finacial market situation seems particularly premature.

Firstly, to state the obvious, the ECB is still massively propping up the financial system in the eurozone. The ECB balance sheet stands at a massive €2.96 trillion up from around €1.5 trillion at the start of 2008. The ECB’s liquidity provision to banks across Europe has slowed in recent months but it remains exorbitantly high, to the point where many banks (particularly in struggling countries) are almost exclusively relying on the ECB for funding. In fact ECB exposure to the PIIGS totalled €1.08 trillion in November 2012. This is by no means normal (or at least shouldn’t be).

There is also still significantly limited activity in the interbank lending market, with overnight volumes still near record lows (click graph to enlarge). 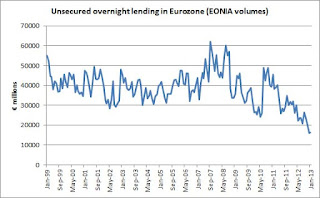 Data from the BIS also highlights that longer term bank lending and investment from stronger to weaker states continues to be dramatically below its peak (click to enlarge). 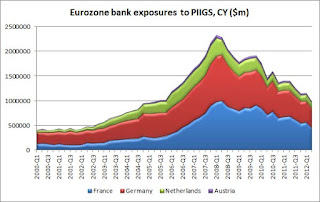 There are many other indicators, such as the limited lending to both businesses and households across the eurozone and the divergence in borrowing costs within different economies (for corporates as well as sovereigns).

Still, the situation in the Eurozone has clearly improved. Some factors, such as the capital outflow from southern to northern countries, have stabilised while others, such as the outflow of deposits from certain banking systems, have shown positive improvement. But we are still miles from being in what many would regard as a “normal situation”.

So when can we expect a “normal situation” to return? Well, with interbank channels having been absent for so long it is hard to expect a rapid turnaround. The ECB is also not expected to exit its massive liquidity provision anytime soon (and even when it does, it will likely be a gradual process), so this will continue to dictate the market. Plenty of other factors (economic growth, unemployment, social stability) also continue to fuel imbalances in the eurozone, so don’t expect cross-border lending or investment in struggling eurozone economies to return to pre-crisis level in the next few months or even years.

This is where the banking union is supposed to come in. However, as we have noted before, the current plans don’t a cross border backstop or a cross border resolution structure for failing banks, for example, so won’t really help in that respect.

Unfortunately, Draghi’s prematurely upbeat comments may have the perverse effect of encouraging the kind of political complacency which he warned about later on in his press conference.