Could the Netherlands provide the beginnings of a coalition for EU reform? 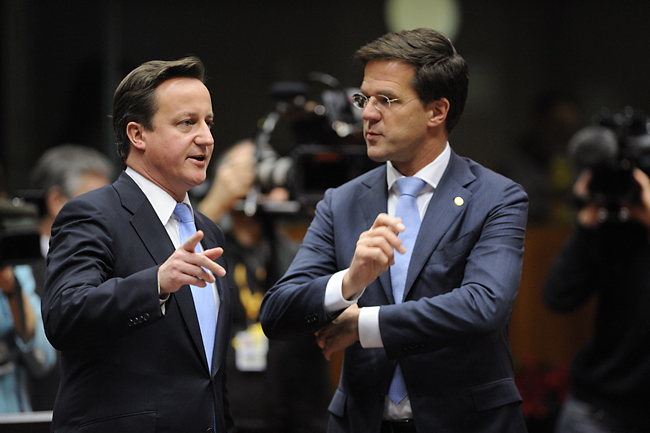 Interestingly, if today’s report in the Sun is correct, David Cameron seems to have enlisted Dutch Prime Minister Mark Rutte’s support for, at least some, of his EU agenda, due to be spelled out in his widely-anticipated speech in Rutte’s homeland in just over a week’s time.

The paper reports that Rutte will back Mr Cameron’s “campaign for a repatriation of money and power to EU member states.” Now, there isn’t much detail to go on here – and the risk is that unrealistic expectations are being raised – but it’s not the first time that the Dutch Prime Minister has voiced a desire to start a discussion about slimming down the EU’s powers. In an interview with the FT late last year, Rutte said, “What we want to do is have a debate at the level of the 27 [member states] whether Europe is not involved in too many areas which could be done at the national level.”

Rutte hasn’t yet set out exactly what areas he wants to look at and he is keen to make the case for reform of at the level of 27, rather than a UK-only deal. Also, the nature of the ‘grand coalition’ between his liberal VVD party and the Dutch PvdA labour party may not allow him to go as far as he might wish. But Rutte is smart enough to know that since the UK cannot be expected to give up its existing opt-outs, the only solution is for the EU to do less.

The VVD’s manifesto suggested that:

“The VVD wants a liberal Europe. That means that the European government should be small, economical and efficient. Not more Europe but a Europe which works…The VVD has a lot of criticism towards Brussels bureaucracy: the regulation-obsession, wasting funds and inefficiency.”

On the budget the VVD say:

“Spending needs to be brought back to less than 1% of GNP in order to make the EU more efficient, modern, and effective. In the new EU budget for 2014-2020, the biggest part is still reserved for agriculture and cohesion funds, almost 800 billion euro. The VVD wants to shift this in favour of investment and innovation.”

Indeed the PvdA could also be persuaded by Rutte and Cameron to look at the balance of powers between the EU and national governments, if the following from their website is anything to go by:

“In the new Europe there shouldn’t be all kinds of rules under the pretext of the internal market, but we’re going to regulate things at the proper level. Some things the Netherlands can better deal with itself .”

Some European political figures, such as Gunther Krichbaum, Chairman of the German Bundestag’s European Affairs Committee, have been quick to dismiss any attempt by the UK to “blackmail” the EU and seek, new UK-specific opt-outs. This is, of course, the public German diplomatic position, so no surprise. However, if presented as an effort to reform Europe and make it work better, putting new emphasis on the EU’s “subsidiarity” principle (discredited in the UK but which still holds sway in Germany), Mr. Krichbaum and many of his colleagues instantly become far more receptive. This shows that if Cameron is able to pitch his argument in terms of “this works for Europe, but by the way it works for the UK too”, he could enlist the support of leaders in other European capitals, but without antagonising the home crowd. Getting the language in the PM’s speech on this issue right will be vital.