The Coalition’s mid-term review on Europe: Bland and blander 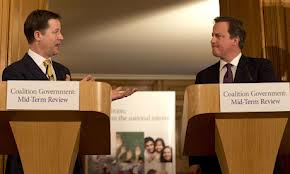 Yesterday saw the publication of the Coalition’s ‘mid-term review’, the aim of which was to “take stock of progress in implementing the Coalition agreement” and to set out the government’s objectives for the remainder of its period of office.

The Europe section of the review was arguably the blandest part of what was a very bland document overall. So hardly exciting. The government highlighted the “referendum lock” on future treaty changes, disentangling the UK from the eurozone bailouts, and establishing the single European patent as its “achievements” (the first and third are genuine achievements). Like all UK governments in recent decades, it also stressed the need to remove the burden of unnecessary regulation and to secure a tough EU budget settlement.

As ever, the differences within the parties on Europe – though you wonder if they aren’t sometimes more perceived than real –  mean that the Government seems unable to set out a ‘grand vision’. As the Sun noted in its leader today, ‘Europe’ remains the “elephant in the room”. To be fair, the Labour party, which has the luxury of the purity of opposition, has also failed to set out where, exactly, it wants the UK in Europe.

In other words: we’re all still waiting for Cameron’s EU speech…