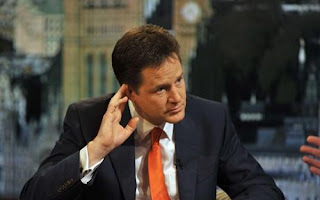 As we noted in our guest piece over on Lib Dem Voice last week, if the Coalition needs inspiration for what to put in its “half-time” report or ideas for what reforms to target in Europe, a good place to start would be  revisiting Nick Clegg’s chapter in the Orange Book. As an MEP in 2004, he put forward some sensible and innovative ideas for EU reform, including the repatriation of certain powers.

“A liberal approach to the allocation of responsibilities to the EU should be founded on a rigorous application of the principles of subsidiarity and proportionality… the EU must only act if there is a clear cross-border issue at stake, or when collective EU action brings collective benefits to all member states that they would not be able to secure on their own… This would help correct the lopsided nature of the EU and so make it more logical and comprehensible to British voters.”

“It would be more logical for the EU to wield strong powers in the manner in which agricultural products are traded across Europe, especially to guarantee high quality and animal welfare standards, whilst leaving much of the system of production support to national governments themselves, subject to EU rules on subsidies and fair competition.”

“There is a danger that the system of EU regional subsidies has reached a point of such excessive complexity that the value added of collective EU funds is being undermined. The founding logic of the so-called EU structural funds remains compelling – that the richer parts of the EU should help provide resources to those parts in dire straits, especially in helping to cover high infrastructure investment costs. Yet, in practice, regional funds are still being channelled to all member states, even Britain, France and Germany who are the main contributors in the first place. Logically, those governments should take full responsibility for the channelling of funds to their own regions, rather than rely on the recycling of funds via the EU… That, in turn, would allow the EU structural funds to concentrate wholly on those countries where the economic need for financial assistance is overwhelming.”

On EU involvement in social and employment law:

“While it is, of course, entirely understandable to support EU measures because of their beneficial effects – working time and parental leave legislation spring to mind – doing so in order to supplant the normal domestic policy making process risks undermining the basic tenets of democratic accountability. If the EU were to be used systematically as a means to bypass domestic political debate, voters will be even more perplexed about who is responsible for what… It disrupts the key relationship between voters and those elected to public office if domestic issues with no obvious EU dimension are arbitrarily shuffled off to Brussels for resolution. For these reasons, there is a compelling case to curtail the EU in its responsibility in the social policy sphere.”

On the EU budget:

“The multitude of small and dispersed EU budget lines, in everything from youth programmes and tourism, should substantially be reduced. It is highly doubtful whether their marginal benefits justify the scarce personnel resources in the European Commission allocated to them”.

It’s hard to disagree, and indeed we have echoed many of these points our reports over the last 18 months, for example on employment law, structural funds, CAP, the EU budget and EU ‘localism’.

Time to get to work?