The OECD, bearer of bad news at Christmas?

A quick post on a topic which we have already explored in our internal devaluation paper and plan to look at in more detail in the New Year: competitiveness in the eurozone.

The OECD released it latest assessment of unit labour costs (ULCs) in the eurozone a couple of days ago and they do not make pretty reading for Italy or France and only slightly better for Spain: 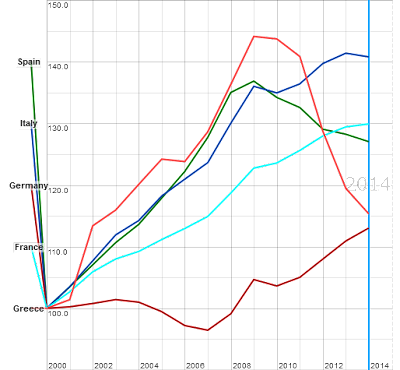 ULCs are often taken as a measure of a country’s competitiveness, it is by no means the only measure but it is a useful indicator of the situation. As the graph above shows Italy will have higher ULCs than Spain, Greece and, obviously, Germany at the end of this year. This trend will only get worse and France could well find itself in a similar position in 2013/14 if things continue on their current path.

This highlights a point which we have made previously – for all his good work on the fiscal side, Italian Prime Minister Mario Monti has failed to provide sufficient reform of the labour market or boost productivity and improve the business climate (other areas which would also help improve the country’s competitiveness). Elections in Italy in early 2013 mean there will be little opportunity for reform in the first quarter of the year. That may be irrelevant depending on the format of the new government – there is no guarantee of a stable pro-reform coalition in Italy.

The results are similarly worrying for France which can ill afford to fall behind other eurozone states, not least because many of these countries are also improving their budget and current account deficits, while making significant product market reforms and deregulating – all of which the French government has shown little willingness to do.

As for Spain and Greece the reading is a bit more positive with their adjustments clearly having some impact – although as the OECD notes much of this has come from cuts to employment and falling domestic demand rather than successful reform. It is also clear that there is some way to go before they reach the levels of Germany (or get firmly within the bounds of acceptable differences, as we have pointed out before). With unemployment already sky-high in both places this remaining adjustment is likely to be painful.

Plenty for eurozone governments to ponder over the festive period then.