In Europe, a commitment is for life (unless you’re France)

Give the French credit, they have an amazing ability to convince others that whatever the French position is, is also the ‘pro-European’ position.

At times, this can become laughable. Like today for example, when a UK journalist asked French President François Hollande to comment on David Cameron’s hints at the ‘repatriation’ of EU powers.

To repatriate? Listen, generally when a country commits it is for life. Therefore, I believe that treaties are meant to be complied with. For the moment, I haven’t heard Mr Cameron asking to get out of certain [EU] competences during a European Council [meeting]. This discussion could take place but Europe is not a Europe in which you can take back competences.

Right. Contrast and compare to François Hollande, March 2012 (during the presidential campaign),

I will renegotiate the fiscal discipline treaty not just for France, but for Europe as a whole.

The [fiscal] treaty has been signed, but not ratified. Therefore, there’s some room for negotiation…My determination will be total.

Fair enough, “signed but not ratified” but still, hardly a display of cohérence by the French President. And with regard to France’s record on the “when a country commits it is for life” stuff, we can’t help but to think of this… 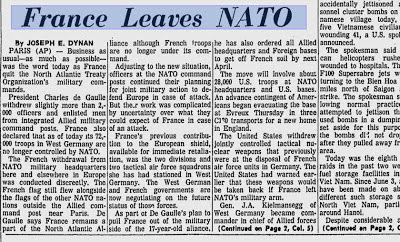