ECB as the single bank supervisor: How high is the Chinese wall? 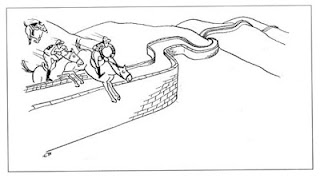 We’ve already assessed the impact of the new single supervisor with regards to the UK and the EBA, here and here, but there is also the obvious question of how the ECB will fare as the single supervisor.

The utmost attempt has been made to stress the separation of supervision and monetary policy within the ECB, but the fundamental fact remains that the ECB Governing Council still has a veto over the decisions of the supervisory board.
The regulation introduces a ‘mediation panel’ to “resolve differences of views” between the Supervisory board and the Governing Council (GC). However, it seems fairly clear that this panel will not be able to vote to overturn the GC decisions but simply provide another talking shop to resolve any differences. As we pointed out before this is the maximum separation allowed under the treaties and therefore the limits how high the Chinese wall between supervision and monetary policy actually can be.  Practically, separation may hold in placid times but in times of crisis it is not clear whether this will be sufficient.
There are also a few other remaining concerns and questions:
Plenty of details still to be fleshed out then and questions remain about how effective a single supervisor the ECB will become. And as ever, though significant, this is only the first part of what will be a very, very long journey towards an EU banking union.