Three months is a long time in Dutch politics 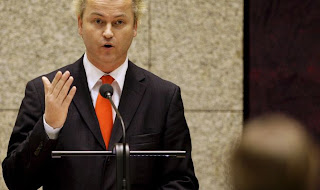 Since the elections in September, international attention on the political situation in the Netherlands has faded.

But, over the weekend, a new opinion poll by Maurice de Hond revealed a big change. Only three months after his defeat, the party of right-wing populist Geert Wilders (photo), who campaigned on a platform in favour of the Netherlands leaving both the eurozone and the EU, is resurgent.

Wilders’ PVV would be the country’s most popular party were these results repeated at an election. That this would be with only 16% of the vote illustrates how volatile Dutch politics has become (it should be noted that at the last election many voters made their minds up at the last minute). But it is still striking that Wilders’ Party for Freedom would jump from 15 seats in the September elections to around 24 now, according to this poll.

The two governing parties, the liberal VVD and social democrat PvdA, would fall from 41 to 22 and from 38 to 23 seats respectively, after only a few months in power.

The far left SP, which is also critical of the EU, has likewise profited from the fall in support for the government parties, increasing its number of seats to 22 from 15. The opposition D66, 50PLUS and the Christian Democrats would also see a large increase in votes.

The September election squeezed out the centrist CDA and forced together the VVD and PvDA, which are not natural political bedfellows (besides their shared ‘pragmatic’ attitude to Europe). The coalition has therefore resulted in several unpopular decisions among each party’s supporters. The VVD had to backtrack on the agreed introduction of an extra healthcare levy which would have hit the Dutch middle class hard. In return, it was also forced to sacrifice a number of tax cuts which the party thought it had secured.

However, another important conclusion we can draw from the renewed success of both Wilders and the SP is that criticism of the eurozone bailouts and the EU in general is not going to go away. We noted this in our pre- and post-election analysis of the elections, with the parties of the centre increasingly taking their cues, if not their entire narratives, from the parties on their flanks.

One example of this was Mark Rutte’s election promise not to send any more money to Greece. A few weeks ago, at the occasion of the third Greek bailout – or extension of the second – Rutte was forced to admit that he thought it was a real pity “he couldn’t entirely keep” his promise, describing it as a “necessary concession”.

Some were quick to proclaim the September election as a sign that the Dutch had “voted for Europe”, but this was always a simplistic reading of the results and downplayed the potential for future volatility. These results would suggest that Dutch politics remain very unpredictable, and that Wilders and the Socialists are rubbing their hands in the wings.