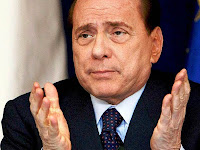 We noted on our blog yesterday (and in a piece in today’s City AM) that Silvio Berlusconi was likely to opt for populist, anti-austerity (and, potentially, anti-German) rhetoric to regain some ground ahead of the Italian elections.

It took Il Cavaliere 24 hours to prove us right. He told Canale 5 this morning,

The fact that the elections have been brought forward following Monti’s resignation is irrelevant, because we are talking about [holding them] just over a month earlier. Therefore, there’s absolutely no real reason for the markets to be upset.

With regard to borrowing costs, let’s stop talking about this imbroglio, please. No-one had ever heard about the spread before. We have only heard about it during the past year. Who cares about how much interest we pay to people who invest in our [debt] obligations compared to what is paid to investors who invest in German public debt?

When the euro was introduced, we used to pay a 4.3% [interest rate on our debt], and Germany used to pay a 3.3%. Germany then decided to do one thing in its own interest. It ordered all its banks to sell all the Italian Treasury obligations they had in their coffers…The other American and international funds thought, ‘Well, if Germany is selling [Italian debt] there must be something wrong with it.’ So they started selling too.

What matters to us is that the interest rates [on our debt]…have gone up by 2% – which, in a year, means less than €5bn to be added to the €80bn [Italy pays] to service our debt.

Therefore, all the stuff that was invented about the spread is a real imbroglio. The truth is that the spread was used to try and bring down a majority voted by Italians.

Enough German-bashing for one day? Nope,

I was one of the 2-3 most influential leaders in the European Council…[but] I continuously opposed German proposals and demands. I said ‘no’ when Mrs Merkel was demanding that Greece suffered cuts which, in my opinion, would have brought Greece – as it then happened – almost to civil war. I said ‘no’ to the Tobin Tax…I said ‘no’ to the fiscal pact, and I even used the veto…to flag up that Italy could not commit to reducing its [public] debt by €50bn a year.

As we noted before, it will be interesting to see how receptive Italian voters will be to this kind of rethoric – and if the promise of an end to German-imposed austerity will make them forget about Berlusconi’s trials and all the rest.