Silvio is back, Mario is out: What lies ahead for Italy? 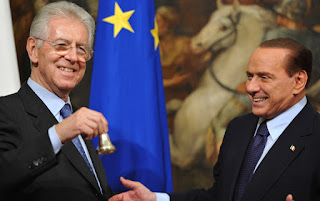 The past weekend was a particularly eventful one for Italian politics – and we followed it on Twitter @OpenEurope.

After lengthy talks with Italian President Giorgio Napolitano, Mario Monti has announced that he will step down as soon as the budget law for 2013-15 is passed. The announcement caught many off guard in Italy, but the situation had got to a point where Monti really had little choice – since he had de facto lost his majority in both chambers of the Italian parliament after Silvio Berlusconi’s party withdrew its support.

What happens next? A timeline

Monti’s early resignation paves the way for early elections. The exact date will be announced in the next few weeks, but a reasonable estimate is already possible at this stage.

What are the short-term consequences for Italy?

The next general elections in Italy were originally due in early April – meaning that the latest events have actually brought them only a few weeks forward. However, there are at least two short-term implications for Italy:

What are the potential implications for the eurozone and the EU?

Italy’s eurozone partners and the EU institutions will be watching the upcoming elections very closely, for obvious reasons. It will be very interesting to see which tones will be used by the different parties during the electoral campaign, and how big an issue the eurozone crisis (and Europe at large) will be. This is what makes Berlusconi’s comeback particularly relevant at this point in time.

Over the last few months, Il Cavaliere has pulled no punches in his attacks on a “hegemonic” Germany which is imposing a tough austerity cure on the rest of the eurozone. Crucially, he repeatedly argued that the “disastrous” economic policies implemented by Monti’s government ought to be overturned to drag Italy out of prolonged recession and make it return to growth.

Berlusconi is well aware that his party is trailing the centre-left Democratic Party by a wide margin in all opinion polls. Given his undoubted abilities as a communicator, he also knows that he may have to insist on a quite populist, anti-austerity (and, potentially, anti-German) rhetoric to try and regain some ground on the road to the next elections.

All the more so if, as Berlusconi himself suggested yesterday, the historic alliance between his party and Lega Nord – which makes no secret of its opposition to the euro and has recently called for a referendum on Italy’s membership of the single currency – is going to be restored.

Add Beppe Grillo’s Five-Star Movement – another supporter of a euro referendum – to the mix, and we may be looking at an election where, if these three parties perform accordingly to what the latest opinion polls are saying, around 40% of Italians would vote for political forces which are against excessive austerity (all of them) and even against the euro (Lega Nord and the Five-Star Movement).

We will respect the very stringent commitments taken…and we will take them on as our own.

Good news for the European Commission, the ECB and Italy’s eurozone partners? In principle yes, but we doubt Nichi Vendola – the leader of left-wing SEL party which is going to back Bersani’s candidacy to Palazzo Chigi – agrees with such a statement.

In other words, it looks as if Italy is gearing up for an electoral campaign where the future of the eurozone crisis and austerity will be among the core issues – somewhat similar to what happened during the Greek elections earlier this year. Indeed, there is clearly some way before the Italian debate becomes as poisonous or categorical as the Greek one.

Extremely interesting stuff on the horizon, so keep following us for further updates.