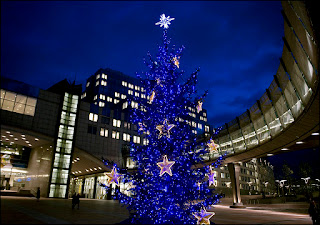 Christmas is approaching and, in that spirit, José Barroso, the President of the European Commission, has written himself a wish list of presents for the EU member states (and particularly the Eurozone) to hand over. The Christmas wish list, or as Barroso puts it “A Blueprint for a deep and genuine EMU” is as follows:

Wish number one: the “rapid adoption of current Commission proposals such as the two-pack and the Single Supervisory Mechanism” – i.e giving the ECB powers over eurozone (and perhaps other) financial supervision.
Wish number two: a eurozone “rebalancing” budget in addition to the EU budget. – more money.
Wish number three: a “Convergence and Competitiveness Instrument” for the eurozone – mutual contracts to enforce bailouts and deficits.
Wish number four: “external representation of the euro area in international economic and financial organisations and fora.” – some more foreign postings.

And thinking ahead for next Christmas (next 18 months to 5 years):

Wish number five: deeper [eurozone] coordination in the field of tax policy issues as well labour markets
Wish number six: an “autonomous” and enhanced eurozone fiscal capacity that will  “rely solely on own resources” – a eurozone tax, budget and treasury- perhaps a financial transaction tax?
Wish number seven: a “power of intervention in the design and implementation of national fiscal policies”
Wish number eight: “The common issuance… of so-called eurobills”, requiring a treaty change – but will the German taxpayer want to underwrite (and perhaps lose) money lent to Greece?

For the Christmas after that (for 5 years time):

Wish number nine: “extend the competences of the Court of Justice, i.e. by deleting Art. 126 paragraph 10 TFEU and thus admitting infringement proceedings for Member States or by creating new, special competences” – i.e further power over national economies.
Wish number ten: “a commensurate involvement of the European Parliament in the EU procedures. The European Parliament, and only it, is that Parliament for the EU and hence for the euro.”

And this would leave you with Barosso’s ultimate wish: “a banking union, a fiscal union, an economic union [and] as a fourth element, appropriate  democratic legitimacy and accountability.”

German Foreign Minister Guido Westerwelle’s response to the proposals was: “It is good that the EU commission is putting forward proposals for a stronger co-operation in the eurozone. But eurobonds, bills or any other form of joint debt liability in Europe are going in the wrong direction.”

To many the proposals may seem alarming, but in truth, most of these proposals have been floating around for a long time. The novel aspect was the proposed time frame outlined by the Commission and combining them in a single vision. Notably though, many similar proposals by the Commission have resulted in very little, especially since the eurozone crisis has put an increasing emphasis on the intergovernmental decision-making found in the European Council.

Herman Van Rompuy’s own list (expected at the December summit) which will probably be more modest and less eye-catching is likely to be more important simply because it more closely reflects the views of the key decision makers in the process.