Buying back Greece: another ad hoc deal or a step towards a solution?

Early on Tuesday morning the eurozone and the IMF reached an agreement which has been widely billed as their most comprehensive package to aid Greece. Now that the dust has settled somewhat, Open Europe has published a new flash analysis assessing the key components of the deal.

For all the talk and all the figures flying around there is still only one that really matters – 124% debt to GDP ratio in 2020, clearly this is not sustainable. Further measures will be needed and the ad hoc nature of this deal, particularly the way it skirts the big decisions, suggests that fears over a ‘Grexit’ will return as soon as Greece begins missing its targets once again.

Although reaching some deal was better than nothing, there are still significant doubts over the deal. The mixture of measures do provide some short term relief but in most cases fail to solve any of Greece’s real solvency problems. The policy with the most unanswered questions is probably the most important one – the debt buy back.  A key question is: who actually owns Greek debt now? Below we break down the shares of Greek debt (click to enlarge): 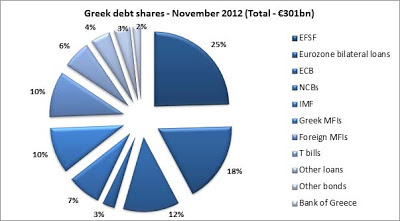 We expect that the only bonds actually eligible for the buyback would be those held by foreign financial institutions (€30bn). However many of these bondholders may be reluctant to take part for a multitude of reasons.

See here for the full analysis.